Taiwan's president confirms presence of US military trainers on island 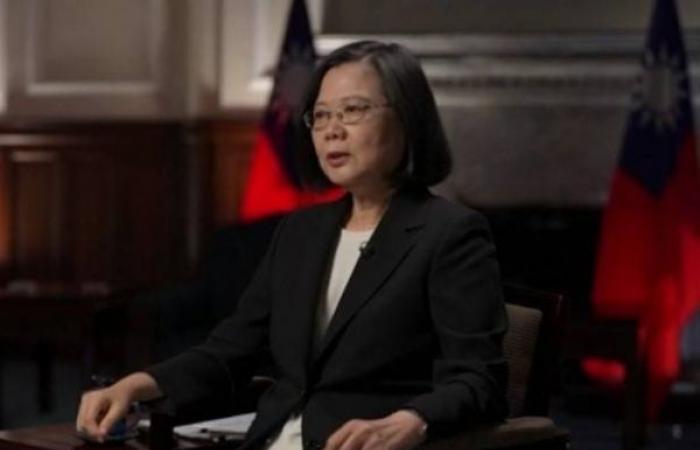 Hind Al Soulia - Riyadh - TAIPEI — Amid rising tensions between the United States and China, Taiwan’s leader on Tuesday confirmed for the first time the presence of American troops on Taiwanese soil, CNN reported.

Speaking with CNN in an exclusive interview, President Tsai Ing-wen said Taiwan, which is located fewer than 200 kilometers (124 miles) away from China's southeastern coast, was a "beacon" of democracy that needed to be defended to uphold faith in democratic values.

"Here is this island of 23 million people trying hard every day to protect ourselves and protect our democracy and making sure that our people have the kind of freedom they deserve," she said.

"If we fail, then that means people that believe in these values would doubt whether these are values that they (should) be fighting for."

Taiwan and mainland China have been separately governed since the Nationalists retreated to Taiwan at the end of the Chinese civil war more than 70 years ago. Taiwan is now a flourishing democracy but the mainland's ruling Chinese Communist Party (CCP) continues to view the island as an inseparable part of its territory -- despite having never controlled it.

Today, relations between Taipei and Beijing are at their lowest point in decades. Earlier this month, China's military sent a record number of warplanes into the air around Taiwan while diplomats and state-run media warned of a possible invasion unless the island toes the CCP line.

The displays of force are partly the result of strengthening ties between Taiwan and the United States under Presidents Donald Trump and Joe Biden. Large arms sales and high-profile visits by US officials have bolstered Taiwan's international standing and antagonized Beijing.

In her interview with CNN, Tsai became the first Taiwan president in decades to acknowledge the presence of US troops on the island for training purposes. The last official US garrison left in 1979, the year Washington switched formal diplomatic recognition from Taipei to Beijing, though last year media reports hinted at small deployments.

Tsai wouldn't say exactly how many US military personnel are on the island at present but said it was "not as many as people thought." "We have a wide range of cooperation with the US aiming at increasing our defense capability," she said.

A former trade negotiator and law professor, Tsai became Taiwan's first female president in 2016, a historic win, which came after large student protests on the island against her Nationalist predecessor's move to form closer ties with mainland China.

When Tsai took CNN for a walk around Taipei earlier this week, hundreds of local citizens waved and called out to her, thanking her for her hard work and asking to pose for selfies.

The Chinese government believes Tsai and her party, the Democratic Progressive Party, are in favor of formal Taiwan independence, despite her public statements favoring the status quo -- an arrangement by which Taiwan remains self-ruled, without an official declaration.

Economic and diplomatic ties with China, developed over previous governments, have frayed, and the Chinese military has ramped up its pressure on the island.

In a major speech on October 8, Chinese President Xi Jinping again pledged "peaceful reunification" between Taiwan and the mainland. Although he made no mention of an invasion in the speech, Xi has previously refused to rule out military action.

A spokesman for China's Taiwan Affairs Office confirmed Wednesday that Beijing reserved the right to use force to pursue "reunification."

Speaking to CNN Tuesday, Tsai called on regional democratic partners, including Japan, South Korea and Australia, to help support the island. "When authoritarian regimes demonstrate expansionist tendencies, democratic countries should come together to stand against them. Taiwan is on the front lines," she said.

Tsai was re-elected in 2020 with a larger percentage of the vote and as part of her second term, she told CNN she wanted to rapidly modernize Taiwan's military.

In August, Taiwan announced it would spend $1.4 billion on new fighter jets, likely F-16s. In December 2020, the island's military began construction on a fleet of eight domestically produced submarines.

Tsai told CNN the government needed to better tailor its military to defend a small island, rather than a conventional fighting force.

However, Tsai added that she was not abandoning the possibility of improved relations with Beijing, saying she would sit down with Chinese leader Xi for talks.

There are no treaties between the US and its regional partners that would guarantee assistance to Taiwan in the event of an attack. But as tensions have risen between Taipei and Beijing, some countries have expressed support for the island.

Japan's Defense Minister Nobuo Kishi told CNN in mid-September that "what's happening in Taiwan is directly linked to Japan," and Tokyo would respond to any threats to the security of trade routes in the region.

In a town hall hosted by CNN on Thursday, US President Biden was firm on the question of whether the US would defend Taiwan in the event of a Chinese invasion.

However, Tsai said she believed if Taiwan came under attack from mainland China, the US and other regional democracies would come to its aid, "given the long-term relationship we have with the US."

"Taiwan is not alone because we are a democracy, we respect freedom and we are peace lovers. And we share values with most of the countries in the region and geographically we are of strategic importance," she said.

These were the details of the news Taiwan's president confirms presence of US military trainers on island for this day. We hope that we have succeeded by giving you the full details and information. To follow all our news, you can subscribe to the alerts system or to one of our different systems to provide you with all that is new.