A year after a powerful typhoon in the Philippines buried her home under avalanches of volcanic rock and sand, Florvik Baldoza is still living with her family in an evacuation center, fearing she will not find a safe haven, as warming leads to increasingly harsh weather.

Hundreds of families from poor villages around the Mayon volcano, on the country’s most populous island of Luzon, are still waiting to be resettled after Cyclone Goni hit the area last November.

Hundreds of thousands of people fled when Cyclone Goni swept through the archipelago, ranked among the countries most vulnerable to the effects of climate change.

But some San Francisco villagers, including the Baldoza family, ignored the warnings and took refuge in a school, believing that a dam would protect them from floods.

These were the details of the news In the Philippines, hurricane victims await resettlement for this day. We hope that we have succeeded by giving you the full details and information. To follow all our news, you can subscribe to the alerts system or to one of our different systems to provide you with all that is new. 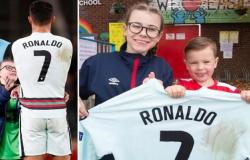