The events of Sudan.. Al-Burhan relieves ambassadors who rejected the “coup”... 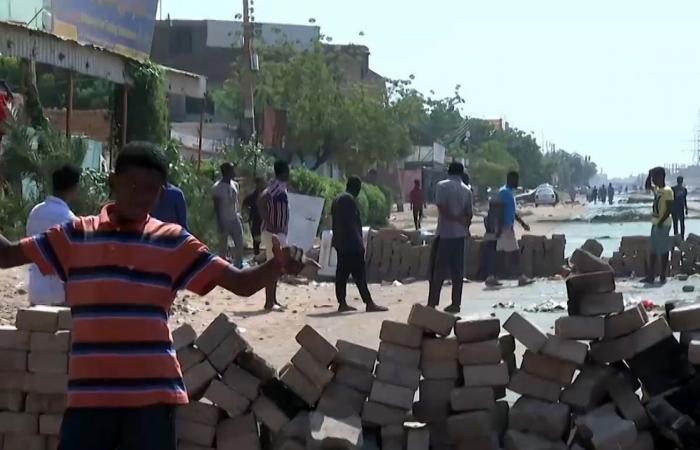 The Sudanese army commander, Lieutenant-General Abdel Fattah Al-Burhan, dismissed 6 ambassadors from their posts, after they rejected his decision to dissolve the Council of Ministers and the Sovereignty, while the African Union suspended Sudan’s membership, and international parties stopped their aid to Khartoum. On the other hand, Prime Minister Abdalla Hamdok received international contacts after his release, and a number of foreign ambassadors met him in Khartoum.

And Sudanese state television reported – yesterday, Wednesday – that the Commander-in-Chief of the army dismissed the Sudanese ambassadors to the United States, Noureddine Sati, to the European Union, Abdel Rahim Khalil, to Qatar, Abdel Rahim Siddik, to China, Jaafar Karrar, and to France, Omar Manis, as well as the President The Sudanese mission in Geneva, Ali Al-Jundi.

A diplomatic source told Reuters – the day before yesterday, Tuesday – that Sudan’s ambassadors to 12 countries, including the United States, the UAE, China and France, had rejected the army’s seizure of power in Sudan on Monday, and the dissolution of a number of transitional government institutions.

Reuters news agency quoted a source it described as close to the Sudanese Prime Minister, as saying that Hamdok affirmed commitment to the goals of the revolution and the civil and democratic transition in Sudan. The source added that Hamdok – who was released on Tuesday after his arrest on Monday – said that any retreat from the democratic path is a threat to stability, security and development in Sudan, and also warned against the use of violence against Sudanese protesters.

The spokesman for the isolated Sudanese government said that those he described as putschists have been practicing for three days the most heinous violations against the Sudanese revolutionaries, and are committing violations that amount to war crimes.

He added that they are besieging neighborhoods and streets with armored cars and soldiers armed with guns, dragging women, arresting children and firing live bullets at the peaceful revolutionaries. .

On the other hand, the leader of the Freedom and Change Coalition-National Charter Group, Muhammad Zakaria, told Al Jazeera that the decisions of the General Commander of the Army were “in response to the wishes of the masses,” adding that describing what happened as a coup was inaccurate.

On the other hand, the demonstrators in Khartoum continue their protests in rejection of the decisions of the Commander-in-Chief of the army to dissolve Hamdok’s government and the Sovereignty Council, suspend work on a number of articles of the constitutional document, and declare a state of emergency.

Protesters blocked roads in a number of Khartoum neighborhoods, demanding civilian rule and rejecting military rule in the country. Hundreds of protesters were seen throwing stones at security forces as they tried to remove the obstacles erected by protesters from Sixty Street, one of the most prominent streets in the east of the capital.

Yesterday, Wednesday, the streets of the Sudanese capital witnessed an intense security deployment by the army and the Rapid Support Forces, especially on Airport Street. In the north of the capital, security forces fired tear gas and rubber bullets at dozens of demonstrators.

Outside the capital, the demonstrators continued their protests rejecting the military coup, and set up checkpoints in Port Sudan (east), Wadi Madani (south) and Atbara (north). Activists on social media called for a million-strong demonstration next Saturday, against the coup against the civilian government.

The Central Committee of Doctors of Sudan – which led the protests against the ousted President Omar al-Bashir – announced on Facebook the killing of 4 “revolutionaries” by shooting from the forces of the coup military council, since Monday, during the protests rejecting the decisions of the army.

On the other hand, the African Peace and Security Council – affiliated with the African Union – suspended Sudan’s membership in the union, and the member states in a session of the Council (15 countries) considered that what happened in Sudan was a military coup. The laws of the African Union provide for the suspension of membership of any country in which a coup occurs, in all activities of the Union.

During the council session, the UN Special Envoy for the Horn of Africa, Parfait Onanga Anyanga, said that it is important to restore constitutional order in Sudan quickly, in line with the Constitutional Declaration and the Juba Peace Agreement. The UN envoy described developments in Sudan as an unconstitutional change of government.

Yesterday, the World Bank announced the suspension of its assistance to Sudan after the coup carried out by the military and toppled the civilian government, and Bank President David Malpass said in a statement that his institution “on Monday suspended the disbursement of all its operations in Sudan, and stopped deciding on any new operation at a time when we are closely monitoring and evaluating the situation.” .

The head of the United Nations Transitional Support Mission submitted proposals to the Commander-in-Chief of the Sudanese army, calling for the opening of a comprehensive and urgent dialogue to restore the partnership between the civilian and military components, on the basis of the Constitutional Document and the Juba Peace Agreement

The head of the United Nations Transitional Support Mission, Volker Britts, presented proposals to the Commander-in-Chief of the Sudanese Army, calling for the opening of a comprehensive and urgent dialogue to restore the partnership between the civilian and military components on the basis of the Constitutional Document and the Juba Peace Agreement, in an attempt to end the crisis in Sudan.

The European Union’s foreign policy coordinator, Josep Borrell, said that he spoke by phone to the ousted Sudanese Prime Minister Hamdok, and assured him of the Union’s support for a return to a civilian-led democratic transition.

The United Nations Mission in Sudan stated that the ambassadors of France, Germany, Norway, Britain, America and the European Union met with the Prime Minister at his residence. The UN mission said – in a tweet – that Hamdok is in good health, and that it continues to call for his “complete freedom”, as the security authorities impose tight security around his house.

In a related context, diplomatic sources in the UN Security Council told Al Jazeera that Russia and China had raised objections to a draft statement of the council drafted by Britain regarding the situation in Sudan, and that efforts were continuing to develop a unified position for the council that takes into account the reservations of Russia and China.

The sources added to Al Jazeera that the draft statement expresses the council’s concern about the army’s seizure of power in Sudan.

And Anadolu Agency reported that diplomatic sources at the United Nations expected the possibility of issuing a statement from the Security Council this morning, Thursday.

It should be noted that the army assumed power after it overthrew in April 2019 the regime of Omar al-Bashir, who ruled Sudan for more than 30 years. In August 2019, the military and civilians of the Forces of Freedom and Change coalition signed a power-sharing agreement, which provided for a 3-year transitional period that was later extended.

Under the agreement, an executive authority was formed from both parties (a Sovereignty Council headed by a military, and a government headed by a civilian), provided that power is handed over to a civilian authority following free elections at the end of the transitional period.

These were the details of the news The events of Sudan.. Al-Burhan relieves ambassadors who rejected the “coup”... for this day. We hope that we have succeeded by giving you the full details and information. To follow all our news, you can subscribe to the alerts system or to one of our different systems to provide you with all that is new.