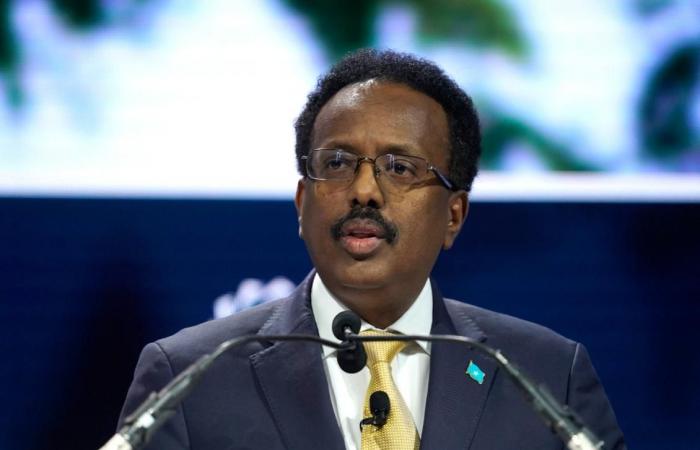 Thank you for reading the news about Somalia’s president, prime minister agree to speed up election and now with the details

Jeddah - Yasmine El Tohamy - MANZINI, Eswatini: Africa’s last absolute monarchy Eswatini on Thursday banned protests as regional mediators landed in the kingdom amid rumbling pro-democracy demonstrations.
A demonstrator died in hospital on Thursday from gunshot wounds suffered the day before when security forces opened fire on a protest, according to unions.
At least 30 health workers were treated for gunshot injuries, the nurses’ union said.
Railways workers led new protests on Thursday in the kingdom formerly known as Swaziland.
“Due to the spate of violent cases during protests, I have stopped all city and town municipals from issuing permits to hold protests,” Public Works Minister Prince Simelane told a news conference.
Internet access was limited, with Facebook completely shut off for a second day.
“Images that are coming from Eswatini are very disturbing indeed, and we can see that the political temperature is very hot,” Jeff Radebe, head of the mediators sent to the country by the 16-nation Southern African Development Community, told South Africa’s public broadcaster.
The Swaziland Democratic Nurses Union said in a statement that nurses and other workers who had converged on a public park in Mbabane, “were met with unprecedented show of force by the police and the army.”
“They were brutally dispersed and scattered all over the capital. As they were running, they were shot with live ammunition.”
The 30 injured were among more than 80 reported hurt on Wednesday in pro-democracy protests that have flared nationwide.
Radebe said the kingdom’s “issues are very complex,” and the team was “going there with an open mind, ensuring that we hear all views, so that at the end of the day the people of Eswatini... come up with a lasting solution.”
The latest flare-up in demonstrations has run for more than two weeks, spearheaded by students, civil servants and transport workers.
King Mswati III is Africa’s last absolute monarch, who enjoys flaunting his wealth and showering his 15 wives with lavish gifts.
Yet he rules over one of the poorest countries in the world, where nearly two-thirds of the population lives in poverty and a quarter of adults have HIV.

In a statement, the Communist Party of Swaziland said the situation at the largest government hospital in Mbabane on Wednesday resembled a “war zone.”
Hospital floors were “drenched in blood,” said the party, adding that police “invaded the hospital, shooting even nurses as they attended to the injured, worsening the situation.”
The nurse’s union said security forces kept shooting at nurses into the evening, even as they were traveling to work night shifts at hospitals.
“Clearly these blood-thirsty imbeciles, brood of vipers are hell-bent to kill nurses and the nation in defense of an ailing government,” the union said, calling on members not to treat any injured soldiers or police.
Five high-school students arrested during protests were arraigned on terrorism charges on Thursday for their role in the democracy push. Prosecutors accused them of burning down a police post.
At least 30 people have died since June in some of the worst unrest in the southern African country’s history.

These were the details of the news Somalia’s president, prime minister agree to speed up election for this day. We hope that we have succeeded by giving you the full details and information. To follow all our news, you can subscribe to the alerts system or to one of our different systems to provide you with all that is new.