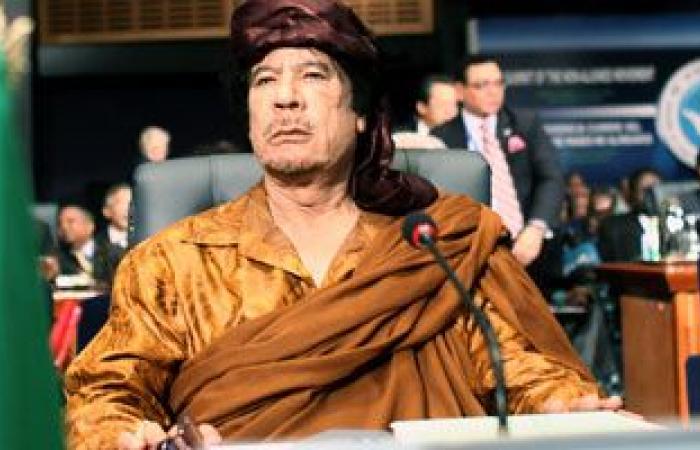 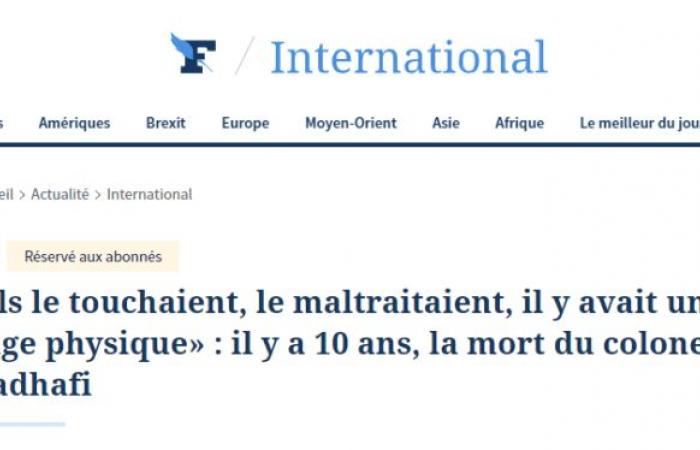 The French newspaper “Le Figaro” published new circumstances of the way in which the killing of the late Libyan leader Muammar Gaddafi took place, 10 years after the incident.

“Le Figaro” published the testimony of the French journalist Alfred de Montesquieu, who entered the room in which Gaddafi’s body was placed a day after his death, lived the events and listened to the testimonies of those who were near the crime scene.

Montescu said: “In that large room, where it was smelling very strong, I entered into a great crowd to find myself at last in front of the body of Libyan leader Muammar Gaddafi, and next to it the bodies of his son and his main bodyguard.”

The journalist explained that the day before (that is, in the early morning of Thursday, October 20, 2011), a convoy of about 40 cars left the coastal city of Sirte, the last stronghold of Gaddafi, hoping to break into the ranks of the rebels while they were still sleeping.
The newspaper said that the reporter was working in Paris Match and went to Sirte immediately after Gaddafi’s death.
It quoted him: “The Libyans were unleashed on that day,” and I saw some Libyans kicking the leader’s corpse or pulling out locks of his hair or even some of his nails.
He added, “They were very angry and took selfies and touched his body and even insulted him, it was pathetic.”
He added, “The first rebel lines, exhausted by weeks of fighting, did not notice anything passing, except for an American drone that monitored the forces trying to escape,” and that column was accompanying Gaddafi, who lost the battle of Sirte.
This escape attempt came at the initiative of the son of the leader Mutassim Gaddafi, who was hoping to cross the desert and reach the south to take shelter there, but as soon as the convoy reached the outskirts of Sirte, a US drone fired a missile that hit 3 of the fleeing cars.
Moments after the plane’s first strike, French NATO fighters dropped bombs on the convoy, which was trying to force its way through rebel fire on the ground.
Alfred de Montesquieu described the scene, citing the testimonies he collected: “It was a massacre. They were transporting hundreds of petrol cans to cross the desert, and many of them died crawling on the ground on burning fuel stains.”
As for Gaddafi, he was hit in the head, and the revolutionaries videos later documented that he was bleeding profusely and fled with his son on foot to be pursued by the rebels before resorting to two large drainage holes.
Here, Montesquieu says: The one who once called himself the “king of the kings of Africa” ​​became trapped in the sewers, before the revolutionaries eliminated the rest of his supporters and killed him in the way that was widely published on social networks.
Montesquieu quotes one of the revolutionaries as saying: “You have to understand that this man, who ruled for 42 years, was worse than Satan and we no longer see him as human at all.”
“He was killed by two bullets at close range,” Montesquieu continued, and this is also the conclusion reached by the forensic pathologist who performed the autopsy.
The newspaper said that soon, a young man named Sanad Al-Sadiq Al-Araibi announced in a video clip posted on social media that he was the one who killed Gaddafi, and presented evidence of that with a gold ring believed to be Gaddafi’s ring.
The newspaper wondered if things really turned out this way? To get an answer from Montesquieu, “Sure,” ruling out conspiracy theories prevailing in the Arab world that say that Gaddafi was assassinated by agents of one of the Arab countries or perhaps even from French intelligence.

These were the details of the news After 10 years, a French journalist reveals new circumstances about the... for this day. We hope that we have succeeded by giving you the full details and information. To follow all our news, you can subscribe to the alerts system or to one of our different systems to provide you with all that is new.