Ibn Khaldun’s house makes a fuss after it was put up... 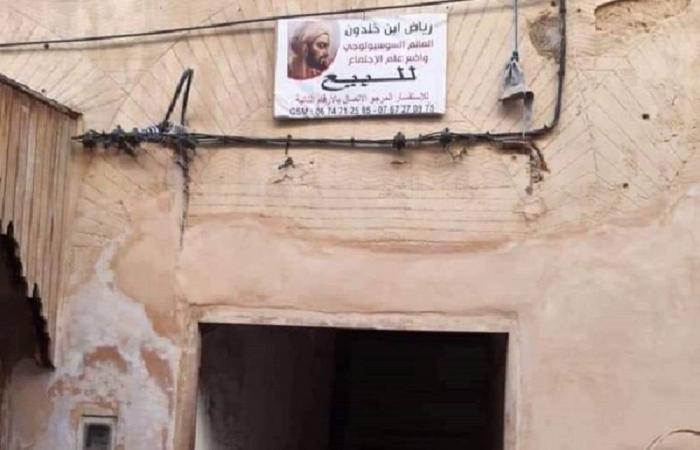 The listing of the house of the famous Arab historian Ibn Khaldun, founder of sociology, in the Moroccan city of Fez, for sale by the royal family caused a great controversy over the protection of heritage.

The announcement of the house of the famous Arab historian “Ibn Khaldun” in the Moroccan city of Fez for sale by the royal family caused a sensation, raising the issue of protecting this heritage and historical building.

Mohamed Ben Abdeljalil, a retired professor of history from the University of Sidi Mohamed Benabdallah, indicated to “Hespress” that there were attempts, earlier, by the cultural authorities in Tunisia to acquire the aforementioned property, in order to restore it and turn it into a private library of books. Ibn Khaldun, pointing out that this building is very symbolic, because Ibn Khaldun resided in it and wrote many of his books inside, including a large part of his “Introduction”.

For his part, Marwan Mihawi, one of the rights holders in Ibn Khaldoun’s house in Fez, said that after his family announced that the building had been put up for sale, the Ministry of Culture contacted them and held a meeting with them about the matter. He added that a committee of experts will be dissolved in this building to complete a report on it before submitting it to the willful ministry to take what it deems appropriate, noting that his family acquired this property in 1969, after four other families took over the property.

The Moroccan Minister of Youth, Culture and Communication, Mehdi Bensaïd, called for an investigation into news that the house was offered for sale.

These were the details of the news Ibn Khaldun’s house makes a fuss after it was put up... for this day. We hope that we have succeeded by giving you the full details and information. To follow all our news, you can subscribe to the alerts system or to one of our different systems to provide you with all that is new.