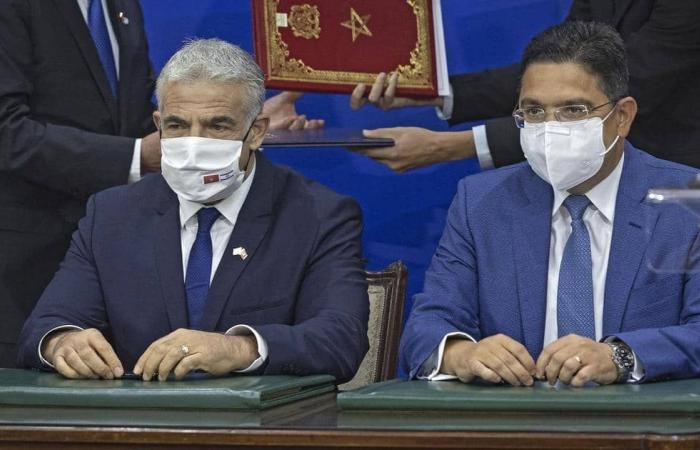 The company, which specializes in gas and oil exploration, revealed, according to Israeli media, that it had signed an agreement with the Moroccan Office of Hydrocarbons and Minerals, authorizing it exclusively to study and explore the natural resources stored by the “Atlantic Dakhla” bloc in the south of the Kingdom.

The energy sector is among the promising sectors that each of the Morocco AndIsrael To be covered by the scope of bilateral cooperation between them, in addition to the fields of research, innovation, tourism, aviation, agriculture, environment, trade and investment.

Since the resumption of relations between Rabat and Tel Aviv last December, the two countries have been keen to accelerate and raise the pace of their cooperation by signing a set of bilateral agreements in various fields, the latest of which was the new government’s ratification of an agreement on air services and another related to cooperation in the field of culture and sports.

Last August, during a meeting with his Israeli counterpart, Yair LapidIn Rabat, Moroccan Foreign Minister Nasser Bourita affirmed the existence of “promising prospects for cooperation” between the two countries, noting that the bilateral relationship between Morocco and Israel is experiencing a new dynamic thanks to the will of both parties.

Economist Mahdi Hadini asserts that cooperation between the two countries is likely to include many areas in the future, most notably the scientific research sector, in which Israel has made great strides and made important progress, which Morocco can benefit from.

The researcher believes that this cooperation was embodied, recently, through the agreement signed by the OCP Group and the Israel Chemicals Group Ltd., in order to promote applied research, a partnership that focuses specifically on several areas, including smart and sustainable agriculture and water.

In a statement to “Sky News Arabia”, the economic expert believes that the two countries can achieve important results in the agricultural field by exploiting the vast agricultural areas that Morocco has, and using the advanced technology developed by Israel in this field.

Hadini adds that the experience, research and agricultural development in Israel can also be used to develop this sector in the southern regions of the Kingdom and address agricultural problems there.

Officials of the two countries do not miss an occasion without reaffirming their determination to develop and value bilateral cooperation, whether at the level of the public or private sectors.

Director of the Moroccan Center for Strategic Studies, Mohamed Benhamou, says that the relations between Morocco and Israel are governed by common interests based on mutual respect.

He added, in a statement to “Sky News Arabia”, that it was natural for relations between Rabat and Tel Aviv to witness great momentum and strong dynamism, in addition to strengthening partnerships that include important and diverse economic fields.

The spokesman stresses that “the resumption of the relationship between the two countries is not considered an end in itself, but rather the beginning of a new path of constructive partnership, the basis of which is strengthening cooperation and ensuring common interests, which is what the two parties seek to achieve.”

Exploration activities are among the new areas of cooperation that will bring together Rabat and Tel Aviv, if the Moroccan government ratifies the agreement signed between the “Richio Petroleum” company for gas and oil exploration and the “Moroccan Office of Hydrocarbons and Minerals.”

The total area of ​​the “block” that will be included in the activity of the Israeli company “Richio Petroleum” in the Atlantic coast will be more than 129,000 square kilometers, and the scope of this activity will extend to shallow and deep waters by about 3,000 meters.

The agreement will allow the Israeli company to explore for oil and natural gas for a period of up to eight years, subject to extension for an additional two years.

The Secretary General of the National Union of Oil and Gas Industries, Al-Hussein Al-Yamani, says that this new agreement falls within the framework of the agreements that Rabat and Tel Aviv have begun to conclude in several areas, since the decision to resume relations between the two countries.

Al-Yamani indicated in a statement to “Sky News Arabia” that the Israeli companies working in the field of oil and gas exploration have important experience in this field, which they accumulated through their work in several regions around the world.

It is expected that the Israeli company will join the ranks of other international companies that have been active for years in the field of exploration for oil and gas fields, and exploration of minerals in different regions of the Kingdom.

The Director-General of the National Office of Hydrocarbons and Minerals, Amina Benkhadra, had confirmed earlier that Morocco had granted 70 exploration licenses and 10 exploitation concessions to international oil and gas companies.

Benkhadra explained, in a press statement, that “the process of oil exploration is long-term, expensive and fraught with risks,” noting that “more than 97 percent of the investments are carried out by foreign partners who hold their exploration licenses, and several areas have onshore and offshore capabilities.” .

Al-Hussein Al-Yamani says that investing in the field of gas and oil exploration is an expensive and adventurous process that may end in draining huge financial resources without reaching the expected results, despite the studies and indicators that precede the process of choosing an exploration site.

Regarding the chances of the Israeli “Richio Petroleum” accessing a stockpile of natural resources in the coasts of the southern regions of Morocco, the general secretary of the National Syndicate of Oil and Gas Industries asserts that the rule adopted in this field is based on the premise that the depths of the oceans and wells store mystical wealth, whether minerals or gas. or petroleum.

The speaker also does not rule out the possibility of oil and gas reserves in the Moroccan desert, whether in the sea or on land, similar to the discoveries that were made in new locations in the world, including the eastern Mediterranean basin.

These were the details of the news Morocco and Israel.. Successive agreements enhance bilateral cooperation for this day. We hope that we have succeeded by giving you the full details and information. To follow all our news, you can subscribe to the alerts system or to one of our different systems to provide you with all that is new.