“Thursday’s protests” in Sudan… Fears of the “worst scenario” 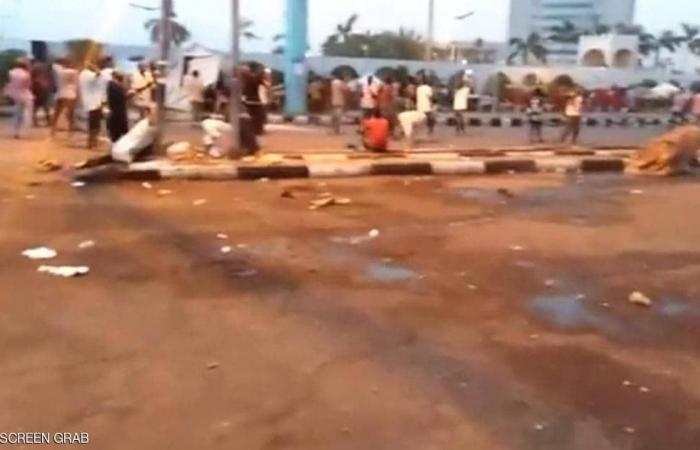 A state of apprehension and political tension in Sudan warns of an imminent crisis that threatens the transitional phase in which the country is going through from the overthrow of the regime. Omar al-Bashir.

Coinciding with a sit-in in the Sudanese capital, Khartoum, demanding the dissolution of the government, a coalition called “Freedom and changeTo go out in supportive marches of the transition on the anniversary of the October 21 Revolution, which was ignited by the Sudanese in 1964 and ended the rule of the late President General Ibrahim Abboud (1958 – 1964).

And for the fifth day, a dissident group from the “Freedom and Change” forces is protesting in front of the government headquarters and the presidential palace in Khartoum, amid calls for a solution Transitional government And the formation of other independent national competencies to manage the affairs of the country.

The sit-in began, on Saturday, with small groups, before expanding in scope, on Monday, and spread to large areas in the center of the country Khartoum It covered most of the vital facilities, ministries and sovereign bodies, including the Presidential Palace and the Council of Ministers, in addition to closing 3 main roads, namely University Street, Al-Gomhoria and Al-Qasr.

On the other hand, the Alliance for Freedom and Change, the civilian partner of the military in the transitional authority, called for rallies to commemorate the October 21 revolution to support civil democratic transformation and protect the revolution.

A day for all Sudanese

The anniversary of the revolution was also considered by the defectors from the “Freedom and Change” alliance as a day for all Sudanese and not monopolized by anyone, and they also called on their supporters to take to the streets and squares in a “million”.

The alliance, which calls itself the “Foundation Platform”, includes JEM The leadership of Gabriel Ibrahim andSudan Liberation Movement It was led by Mona Arko Minawi, along with civil political forces, and leaders, most notably: Al-Tom Hajo, Mohamed Sayed Ahmed Al-Jakoumi, Mubarak Ardol and others.

And Wednesday, scheduled warning The Committee to Dismantle the Brotherhood of Sudan, Wajdi Saleh, the people should not be drawn into any language that does not resemble values Sudanese people, and not get discouraged.

He pointed out, during a press conference, that the forces of the revolution were subjected to attempts to distort and tear apart the hostile forces and dream of regaining power.

In his speech, the Minister of Foreign Affairs called Sudanese Cabinet Khaled Omar Youssef, to cohesion and unity of the ranks to miss the opportunity for the remnants and putschists who think and believe in the death of the forces of the revolution.

On Tuesday, the “Freedom and Change” coalition prepared 14 pending issues, calling on the government to dialogue and address them in accordance with the constitutional document.

The outstanding issues from the perspective of the Central Council for Freedom and Change include reform council of state The transition of his presidency to the civilian component, government reform, the security and military sector, the implementation of security arrangements to reach a single national army, the reform of the judicial apparatus, along with resolving the issue of eastern Sudan, and the formation of the Transitional Legislative Council as soon as possible.

International anticipation and calls for consensus

Today, the US Embassy in Khartoum called on Sudanese demonstrators to remain peaceful in demonstrations in support of the transition.

And she said, in a statement, that she was “aware of the calls directed to the Sudanese to demonstrate on Thursday, to express their views on the current situation in the country.”

The statement added, “We encourage peaceful demonstrators and remind them of the strong American support for the democratic transition in the Middle East.” Sudan to achieve freedom, peace and justice.

“We also encourage civilian and military leaders to work together in partnership to overcome their differences and take the necessary measures to implement the basic parameters of the Constitutional Declaration,” he continued.

Sudan is also awaiting an upcoming visit of the American envoy to the Horn of Africa. Jeffrey Feltman, this week.

The Sudanese academic, Kamal Jahallah, said that the forces of freedom and change will strive for the success of tomorrow’s mobilization through all their energies, cadres and media capabilities to achieve a moral victory, otherwise they will lose everything.

Jahallah added, in statements to “Sky News Arabia”, that any weakness in the crowd would strengthen the second party, which the civil forces consider supported by the remnants of the former regime.

He pointed out that the Brotherhood infiltrated the current sit-in near the presidential palace and was waiting for the opportunity to spread chaos, warning, “Whenever they have an opportunity, they will not miss it.”

He explained that the remnants of the former regime are still holding on to many threads of the political game through organizations, companies, a media machine, an experience of 30 years of rule and a deep state.

And he warned of what he described as the “worst scenario”, which is the occurrence of clashes between the two parties caused by the remnants of the former regime.

In turn, Sudanese journalist Ibrahim Musa said that the formation of the political scene in Sudan depends on the outcome of Thursday’s protests.

Moussa added, in statements to “Sky News Arabia” that the two conflicting parties of “freedom and change” are fighting over the mobilization, as each party aims to support its position based on the strength of the street.

He pointed out that there are great fears about the Brotherhood’s exploitation of the existing crisis in an attempt to apostate.

He continued, “Hamdok must have a clear opinion to prevent the country from descending into chaos, especially as there are fears of clashes between protesters.”

These were the details of the news “Thursday’s protests” in Sudan… Fears of the “worst scenario” for this day. We hope that we have succeeded by giving you the full details and information. To follow all our news, you can subscribe to the alerts system or to one of our different systems to provide you with all that is new.