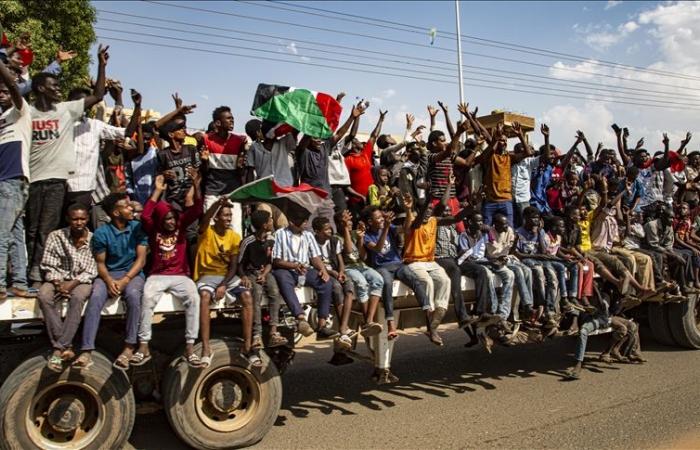 Sudanese demonstrations continued, Thursday evening, in the capital, Khartoum, while a non-governmental medical committee announced the injury of 18 people.

And the Sudanese police forces fired tear gas canisters, to disperse thousands of demonstrators in front of the parliament headquarters, west of the capital, Khartoum.

Thousands of demonstrators continued their movements in the main streets of Khartoum, including “Airport Street”, chanting slogans calling for a civilian government, according to the Anatolia correspondent.

Meanwhile, the Sudanese police announced that a number of policemen were injured, including 2 with live bullets, and a vehicle transporting soldiers was burned.

The Socialist Doctors Association (non-governmental) said that Thursday’s processions recorded 18 injuries, including a gunshot wound to the leg and a rubber bullet wound to the head.

She added that “there are two cases in Alia Hospital in Omdurman, one of them was hit in the chest, and the other was hit by a tear gas canister.”

In turn, the police said in a statement seen by Anadolu Agency: “A limited group of demonstrators deviated from peacefulness and threw stones at the forces stationed in front of the parliament headquarters in Omdurman with stones and Molotov cocktails.”

The statement pointed out that the police forces “used the legal amount of riot dispersal tools, despite the persistence of these groups and their burning of a vehicle transporting soldiers.”

The statement stated that the overall events resulted in the injury of a number of policemen (unspecified), including two with gunshot wounds to the abdomen and the leg.

For its part, the Sudanese Journalists’ Network, one of the components of the Professionals Association, announced the injury of journalist Ahmed Hamdan (who works for the “The Democrat”), who was hit by a tear gas canister in the head.

The Sudanese authorities did not issue any comment on the events at the parliament headquarters until 18:10 (GMT).

Activists circulated on social media platforms a set of photos and videos, showing a state of hit and run between the demonstrators and the police forces, as a result of the firing of a barrage of tear gas canisters.

Earlier on Thursday, thousands of Sudanese demonstrated in Khartoum and the rest of the country’s states, to demand “the protection of the revolution, the completion of its tasks and the realization of its demands.”

The protests were launched to demand civilian rule, an end to the partnership with the military in the transitional authority, the completion of a peaceful democratic transition, and the rejection of the calls of the “National Charter” movement and the military component in the authority to dissolve the government, and form another.

The Khartoum demonstrations were presented by Prime Minister Abdullah Hamdok, and a number of ministers, most notably Minister of Cabinet Affairs Khaled Omar Youssef and Transportation Mirghani Musa, according to the Anatolia correspondent.

On Wednesday, the Sudanese Professionals Association, the leader of the protest movement, called on all forces and sectors to participate in Thursday’s demonstrations, and set 13 demands to accomplish the tasks of the revolution that toppled on April 11, 2019, President Omar al-Bashir (1989 – 2019).

A month ago, tensions have been escalating between the military and civilian components of the transitional authority, due to military leaders accusing the political forces of looking only for their personal interests and responsible for the coups in the country, against the background of thwarting a coup attempt last September 21.

Since August 21, 2019, Sudan has been living a 53-month transitional period that ends with elections in early 2024, during which power is shared by the army, civilian forces and armed movements that signed a peace agreement with the government on October 3, 2020.

The news published on the official page of Anadolu Agency is an abbreviation of a part of the news that is presented to subscribers via the News Stream System (HAS). To subscribe to the agency, please contact the following link.

These were the details of the news Sudan..Protests continue, and 18 injured in Thursday’s demonstrations for this day. We hope that we have succeeded by giving you the full details and information. To follow all our news, you can subscribe to the alerts system or to one of our different systems to provide you with all that is new.