A new blow to the Turkish lira after the ambassadors threatened... 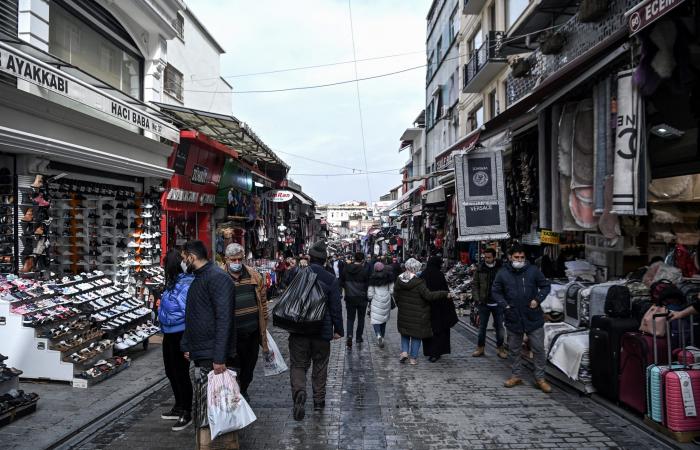 The Turkish lira reached its lowest level ever, Thursday, recording 9.47 against the US dollar, in a “new blow” that came after the Central Bank announced a 200 basis point cut in the interest rate from 18 percent to 16 percent.

It also followed Turkish President Recep Tayyip Erdogan’s threats to expel the ambassadors of ten countries from his country, as he said, according to what was reported by “Anadolu Agency”: “I told our foreign minister, our country cannot be welcoming to the point of hosting these people with us.”

Ten Western countries had called in a statement, on Monday, for a “fair and quick settlement of the case” of Osman Kavala, a Turkish businessman and activist who has been imprisoned for four years, which angered Ankara, which prompted it to summon them on Tuesday.

After the lira hit, where is Turkey going? What is the secret of the central dismissals?

At a time when the reasons for their dismissal were conflicting, the Turkish lira recorded a new decline in the foreign exchange market.

The central bank did not provide little indications about the future course of monetary policies, but said in a statement that it “will continue firmly to use all the tools available to it until strong indicators appear indicating a permanent decrease in inflation and reaching the target of 5 percent in the medium term.”

“A suitable ground will be created for continued investment, production and employment growth in a healthy and sustainable manner,” he added.

Turkish economists expect that the current value of the exchange rate of the Turkish lira may not stop at the mentioned limit, especially with the Central Bank’s adherence to the policy of reducing the interest rate, as well as Turkey’s foreign policies that are also reflected in the exchange rate, which appeared recently, after Erdogan’s wave Military operation in northern Syria.

For two years, Erdogan has been insisting on the rate cut path, in a policy that was enough to dismiss four central bank governors, and finally two deputies to the current governor, Shihab Kavcioglu.

Erdogan, a supporter of strong growth backed by low-cost loans, has long opposed high interest rates, which he constantly describes as “the root of all evil”, stressing that they “encourage inflation.”

However, on the other hand, the Turkish street, especially those who oppose it, view this policy as a “challenge” and that it reinforces the failure of the Central Bank to remain as an independent institution.

Five days ago, Kemal Kılıçdaroğlu, the leader of the Republican People’s Party, unexpectedly visited the Central Bank, expressed his criticism of the policy in which it is proceeding, and said, according to Turkish media, that it should act “in the public interest.”

A few days later, the Association of “Turkish Businessmen and Industrialists” (TUSIAD) published a detailed report in which it indirectly criticized the monetary policies under which the Central Bank is operating, and implicitly warned against the high exchange rate and unbridled price hikes.

Talks about the deterioration of the Turkish currency dominate the Turkish street, whether ordinary citizens or economists and officials of Turkish parties.

After every decision issued by the Central Bank, hashtags are published on the “Twitter” networking site, and users criticize the state of their currency.

He added, “The first episode of the Mossad, then Erdogan wants to expel the ambassadors of the ten countries, and now the central bank is gaining interest rates by 200 points to 16 percent.”

The journalist then referred to the deterioration in the price of the currency.

The lira had suffered “bruises” within a few years, as it lost 59 percent of its value against the dollar since the beginning of 2018.

As a result, many foreign investors withdrew their money, and according to Central Bank data, foreign investors owned $6 billion in government bonds at the end of the second quarter of 2021, compared to $61.5 billion at the same time in 2013.

Future Party leader Ahmet Davutoglu wrote on his Twitter account: “Instead of fighting inflation, the Turkish Central Bank appears to be under the control of politics.”

After the Turkish Central Bank’s decision, what happens to the lira? And what does Erdogan want?

This quickly reflected on the exchange rate of the Turkish lira, as it fell to touch the 9-lira-per-dollar barrier, then reached nearly 8.80

While the economic researcher, Silva Demirlap, commenting on the new interest rate cut, said: “Wherever loss comes, it is profit. Such a very valuable example.”

“The central bank should not insist on its wrong decisions. Lowering the interest rate at the wrong time increases economic costs and inflation. Not to mention expanding the economy, it is contracting,” she added on Twitter.

As for the deputy head of the Republican People’s Party, Muharrem Erki, he considered in a tweet via “Twitter” that “the Turkish economy is in a state of total collapse, due to the short-sighted administration.”

“The AKP administration has gone crazy! The Central Bank, knowing that the currency will fly, cut the interest rate and the dollar is 9.50. It is clear that someone is making money! Let every penny you steal from People’s pocket is forbidden.”

In return for the foregoing, the Turkish government adheres to one narrative regarding the changes in the Turkish currency, along with the general economic situation.

Erdogan has previously announced that the Turkish government’s focus in the next stage will be on foreign investments, explaining that he is determined to make Turkey a center of attraction for local and international investors, with low risks, high confidence and satisfactory profits.

In addition, Erdogan said in recent statements: “Everyone will see that when the investment is done to the fullest, we will rise to the ranks of the countries that provide the highest percentage of safe profits.”

Most of the statements of Turkish officials indicate that “there is a difference” between the deterioration of the currency and the economy as a whole.

On Tuesday, Turkish Trade Minister Mehmet Muş announced that “for the first time in the history of the republic” his country’s exports exceed 1 percent of the world total.

Muş indicated, through his account on “Twitter”, that the volume of Turkish exports in 1980 was 0.14 of its global counterpart, and in 2000 it rose to 0.43, adding: “Turkish products are now exported to all parts of the world. This success is for all of Turkey.”

For his part, Erdogan expected his country to achieve economic growth of 9 percent in 2021, after it was hit, like other economies in 2020, due to the Corona crisis.

He explained, according to what Anatolia reported, that the growth rate achieved in the first and second quarters of 2021 indicates the possibility of the Turkish economy growing by 9 percent throughout this year.

These were the details of the news A new blow to the Turkish lira after the ambassadors threatened... for this day. We hope that we have succeeded by giving you the full details and information. To follow all our news, you can subscribe to the alerts system or to one of our different systems to provide you with all that is new.