Putin: Humanity entered a new era 3 decades ago and the... 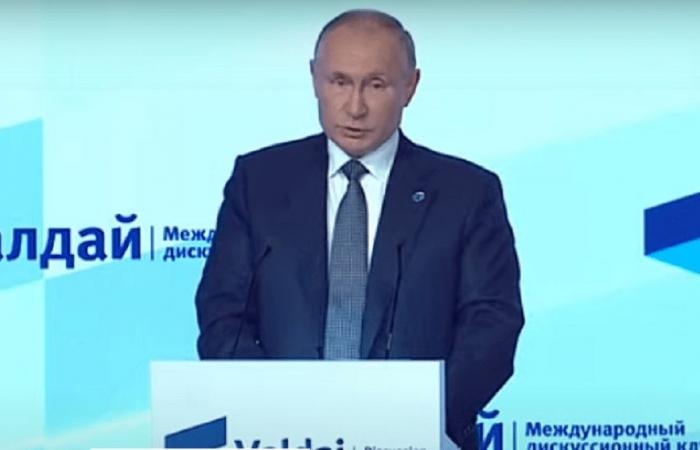 Russian President Vladimir Putin stressed that humanity entered a new era 3 decades ago and began searching for a new balance and a basis for the global order.

Speaking at the closing session of the 18th annual meeting of the Valdai International Forum in Sochi, he said that “it was not possible to find support for a new balance in the world and the “winners of Olympus” noticed that the earth was slipping under their feet.”

He added, “Climate changes have become a normal thing, and we have seen floods and fires all over the world.”

He continued, “People of developing countries lose hope in the future, and this leads to an increase in immigration. The Corona pandemic was supposed to unite people, and what happened the opposite, the differences intensified.”

He explained that “the revolution is the way to exacerbate the crisis, not get out of it.”

Putin: In shaping our approach, we will be guided by the principles of reasonable conservatism. This should have happened a few years ago, but the emotions in the international arena did not reach their current intensity, although, of course, we can say that the clouds were thickening even at that time.

He added, “As the world is now going through a structural breakdown, the importance of reasonable conservatism as a basis for the political process has increased many times over.”

Putin: I think it’s brutal when children in the West are taught that a boy can become a girl

Putin: The debate about the rights of men and women in the West has turned into an absolute illusion

Putin: The struggle for equality turns into a dogmatism on the verge of absurdity, Hollywood issues instructions on how to make a film, what ethnic characters are needed

Putin: It is noble to fight racism, but in the new culture the issue turns in the opposite direction

Putin: Our contradictions with the modern West do not lie in the ideological or economic level, but in the basic principles of our attitude towards life itself and its structure… And every year they move further and further away.

Putin: Everyone says that the current model of capitalism, which today is the basis of the social structure in the vast majority of countries, has exhausted itself.

Putin: What we are currently seeing in the energy market is another evidence of the failure of capitalism

Putin: Corona death figures are terrible, comparable and even exceed the military losses of the main participants in the First World War

The forum’s agenda, which lasted for 4 days, included various topics and issues that will be addressed during the four days, the most important of which are: “Global Change – the 21st Century: People, Values, and the State”.

Among the topics announced by the organizers are issues of freedom and closed societies in the world, artificial intelligence, and the international struggle for technological supremacy.

Forum members will also talk about Russian policy in light of international efforts to combat climate change, a topic that is gaining increasing place on the international agenda.

Putin has traditionally met with forum participants since its establishment in 2004, when the first conference was held near Valdai Lake in Russia, and meetings are usually held in Sochi.

These were the details of the news Putin: Humanity entered a new era 3 decades ago and the... for this day. We hope that we have succeeded by giving you the full details and information. To follow all our news, you can subscribe to the alerts system or to one of our different systems to provide you with all that is new.