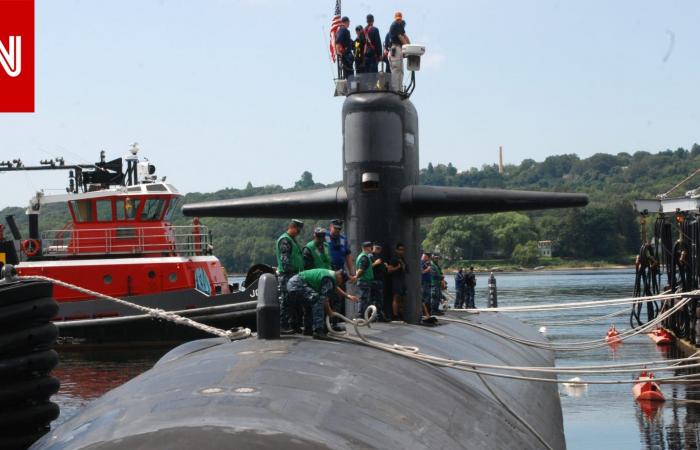 Atlanta, United States (CNN) — A US nuclear-powered submarine struck an underwater object in the South China Sea on Saturday, according to two US Defense Department officials, amid rising US-China tensions.

The two officials said several sailors aboard the aircraft carrier USS Connecticut were injured in the accident. According to a statement issued by the US Pacific Fleet, none of the injuries were life-threatening. It is unclear what the Sea-Wolf may have hit while submerging.

“The submarine remains in a safe and stable condition. The Connecticut Nuclear Propulsion Plant and Connecticut Nuclear Propulsion Plant have not been affected and are still operating at full capacity. The accident will be investigated,” the statement said. The US Navy did not specify the incident, which occurred in the South China Sea, but it took place in international waters in the Indo-Pacific region.

The incident occurred as tensions escalated between the United States and China, due to the Chinese military’s incursion into the Taiwan Air Defense Integration Zone (ADIZ) on Saturday, when 39 Chinese military aircraft including fighter jets and transport aircraft entered.

The Biden administration has shifted the focus of American national security away from the wars of the past two decades and toward Beijing, which has established itself in the region and on the world stage. The CIA on Thursday announced the creation of a new task center for China after a months-long review that found China to be the biggest long-term threat to the United States.

A day earlier, National Security Adviser Jake Sullivan met a high-ranking Chinese official in Switzerland, in what a senior administration official described as a “frank, direct and wide-ranging discussion.”

The meeting, which the official said had a “different tone” from the acrimonious meeting between Sullivan and his Chinese counterpart six months ago, set the stage for a hypothetical meeting between President Joe Biden and Chinese President Xi Jinping later this year in an effort to ensure stability.

But the agreement in principle between the two leaders to meet did little to ease the current friction in the region, nor did it ease friction around the South China Sea, where China has built a series of bases on reefs and artificial islands in the disputed waterway.

The aircraft carrier USS Connecticut was operating in the waters around the South China Sea, where the United States and its allies were carrying out a massive, multinational show of force in the region, known as the Carrier Strike Group 21. The ongoing exercise saw ships from the United States, United Kingdom, Japan, Australia, Canada and the Netherlands, including three aircraft carriers, train in and around the South China Sea.

These were the details of the news US submarine hits mysterious object in South China Sea amid escalating... for this day. We hope that we have succeeded by giving you the full details and information. To follow all our news, you can subscribe to the alerts system or to one of our different systems to provide you with all that is new.