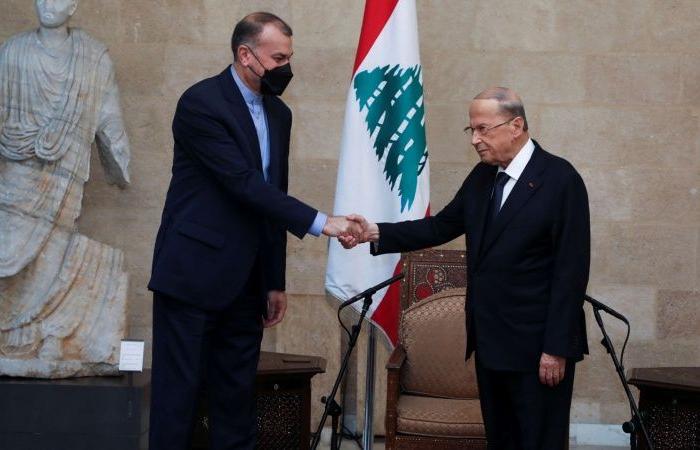 Abdullahian reiterated his country’s “steadfast support for Lebanon, and the Iranian government’s readiness to provide all support in the areas it needs, especially in the difficult economic conditions it is going through.”

He said that “Iran will not spare Lebanon any assistance if it is asked to do so,” adding, “We are confident that Lebanon is capable of overcoming difficulties as it overcame its problems in previous stages.”

The Iranian Foreign Minister’s visit comes a day after the Tanker Trackers service announced on Twitter that the third Iranian tanker loaded with Iranian fuel to Lebanon has arrived at Banias port in Syria.

Observers believe that the Iranian minister came to translate, through this visit, in diplomatic language, what Tehran had announced about sending ships loaded with fuel to Lebanon, passing through Syria through irregular routes, and through that it imposed a fait accompli.

The Iranian minister had arrived at dawn at Rafic Hariri International Airport in Beirut, while his visit was met with a protest movement in Sassin Square in the Ashrafieh district of Beirut, rejecting this visit and Iranian interference in Lebanese affairs.

The protesters raised banners that did not welcome the Iranian visitor, reading “Iran, get out of Lebanon,” and “We demand the liberation of Lebanon from Iranian occupation,” and others calling for the disarmament of Hezbollah, which is described as the “Iranian arm,” and the implementation of international resolutions.

Political and popular reactions followed, rejecting this visit, especially at a time when Iran is seeking to engage more in Lebanon, as Hezbollah began to intensify its commercial activities with it openly, by importing fuel from it through Syria, defying the state and exposing it to the threat of US sanctions.

The Political Council of the Lebanese National Liberal Party, which participated in the demonstration on Thursday, indicated that it “is watching carefully the visit of the Iranian Foreign Minister and expressed his dissatisfaction with it.” “The party insists on its constant pursuit of Lebanon’s neutrality, limiting arms to the Lebanese army, and implementing international resolutions,” he said in a statement.

These were the details of the news Iran’s foreign minister in Lebanon for Hezbollah | for this day. We hope that we have succeeded by giving you the full details and information. To follow all our news, you can subscribe to the alerts system or to one of our different systems to provide you with all that is new.