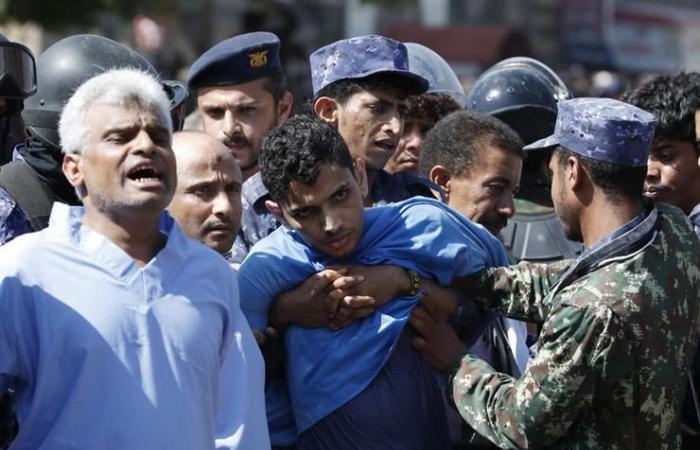 In a move that sparked popular anger, the Yemeni Houthi militia executed a 17-year-old minor, after accusing him of treason, and of helping to reveal the location of former Houthi leader Saleh al-Sammad, who was killed in an air strike, in 2018.

The child Abdul Aziz Ali Al-Aswad stands, burdened with fear and dread that made his feet unable to carry the rest of his body, in a picture that was recently widely circulated on social media, from scenes broadcast by the terrorist group in Saudi Arabia, for the moments of the execution of 9 convicts – black among them – for participating in The so-called “head of the Supreme Political Council formed by the Houthi militia”, Saleh Al-Sammad, was killed.

Today, Saturday, the Houthi militia announced the execution of 9 people accused of participating in the killing of Al-Sammad, who was killed in an air strike by the Arab coalition targeting his convoy in the city of Hodeidah in 2018.

The footage broadcast by the Houthi militia showed a picture of the black boy, Abdulaziz, in a blue uniform, collapsing as he watched his eight comrades breathe their last.

The Houthis had arrested Abdul Aziz four years ago, while he was still a minor, and accused him of being involved in the killing of Al-Samad, to be executed today, Saturday. Video clips showed Houthi gunmen emptying bullets into the heads of the detainees, while they were lying on the ground, handcuffed.

The Saudi Al-Hadath channel reported that the last words of the Yemeni child before their execution were “God is innocent, and God is innocent,” when he was placed on the ground to be executed with 8 Yemeni citizens in the center of the capital, Sana’a.

The Yemeni Minister of Information, Muammar Al-Eryani, on Friday described the Houthis’ execution of 9 civilians after a sham trial as a horrific crime.

In a series of tweets he posted on his Twitter account, he said that the Iranian-backed Houthi militia executed 9 civilians from Hodeidah Governorate, including a child, after years of enforced disappearance and brutal torture, which led to the death of one of them, and subjecting them to a mock trial in which they were deprived of their most basic rights, a terrorist crime. It reveals its ugliness, its bloodiness, its criminality, and its disregard for the lives of Yemenis.

He added, “We affirm that the horrific crimes and violations committed by the Houthi terrorist militia against civilians in the areas under its control, the latest of which is the cold-blooded murder of 9 civilians, will not be subject to statute of limitations and will not pass without punishment, and that all militia leaders and members involved in it will be brought to account in the near future.” .

For its part, the Yemeni parliament called on the international community to condemn the Houthis’ execution of citizens and hold the perpetrators accountable, and said that the execution of 9 citizens is a tragedy and evidence of the politicization of the judiciary by the Houthis.

The Arab Parliament called on all international human rights institutions to condemn this terrorist act and take the necessary legal measures to ensure the prosecution of the perpetrators of this crime against humanity, which is added to the terrorist record of the Houthi militia.

In turn, Sabah Hamid, head of the Association of Mothers of Abductees, Marib Branch, confirmed that what happened was a major and unforgivable crime.

She added, in an exclusive statement to Al-Arabiya/Al-Hadath, that the world must intervene to prevent the crimes of the Houthis, stressing that there is no law that accepts executions without trials.

She stressed that this death penalty is one of the most heinous crimes that a human mind can imagine, calling on human rights organizations to intervene urgently.

These were the details of the news “Abdul Aziz Al-Aswad” .. What do we know about the minor... for this day. We hope that we have succeeded by giving you the full details and information. To follow all our news, you can subscribe to the alerts system or to one of our different systems to provide you with all that is new.