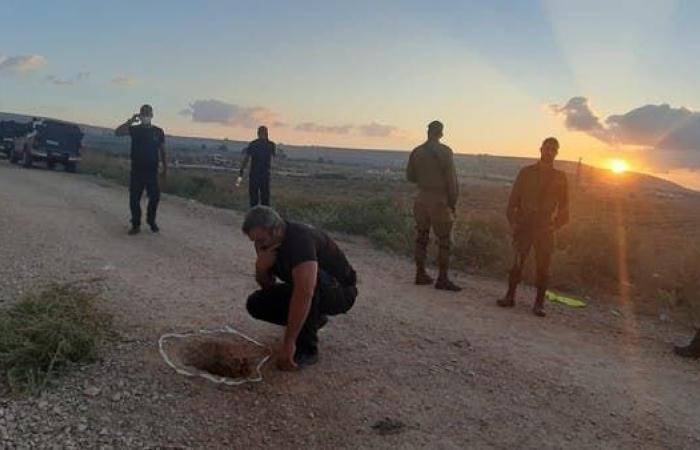 The six prisoners escaped from Gilboa Prison Northern Israel, which is heavily guarded, is causing a security alert in the country.

While investigations continue to find out the details, they are carried out Israeli authorities A large-scale manhunt operation to arrest the fleeing prisoners after the arrest of 4 others.

Concurrently, the Israeli broadcaster, Kan, published, on Friday, the first pictures of the drilling tools he used Palestinian prisoners Fleeing from prison, after information spread that prisoners used a tablespoon to dig.

The commission stated that the tools were revealed by the prisoner’s lawyer, Mahmoud Al-Ardah, who was arrested after escaping in Nazareth, and were hidden in the floor of the cell.

This came after the crossbar revealed during the investigation that he had cut the exit hole from the tunnel into the room, and carried out the order alone, using an iron screw that he found strong enough to penetrate the iron.

He also revealed that he used a piece of metal that he brought from one of the cupboards in the room to help him cut the iron sheet covering the sewer hole.

Tunnel under the bathroom sink

It is noteworthy that the escape took place Monday before last, from Gilboa Prison in northern Israel, which is heavily guarded, through a newer tunnel under a sink in a bathroom that led the escapees out of the prison.

After that, the Israeli authorities carried out a large-scale manhunt operation in Israel and the occupied West Bank, the birthplace of the fugitives, and the army deployed reinforcements.

On Friday evening, the Israeli police announced the arrest of two of them belonging to the Jihad movement in the city of Nazareth in northern Israel. They are Yaqoub Qadri (48 years old) and Mahmoud Abdullah Ardah (45 years), who has been detained for 25 years.

In a statement, the Israeli police said that its members spotted two fugitives and “chased them with a helicopter,” noting that they were arrested in Nazareth.

Last Saturday, Israel announced the arrest of two others, one of whom is Zakaria al-Zubaidi, a former commander in the Al-Aqsa Martyrs Brigades, the military wing of Fatah movement, in the Jenin refugee camp.

The special forces arrested the two men while they were hiding in a parking garage in the town of Shibli, located 10 kilometers east of Nazareth, according to the Israeli police.

In addition, the length of the tunnel that the prisoners dug to get out reached tens of meters, and the tunnel opening was discovered a few meters outside the prison walls.

These were the details of the news Not a spoon.. Israel reveals digging tools used by Gilboa prisoners for this day. We hope that we have succeeded by giving you the full details and information. To follow all our news, you can subscribe to the alerts system or to one of our different systems to provide you with all that is new.