“Crazy blood sport” .. 1,5 thousand dolphins were slaughtered in a... 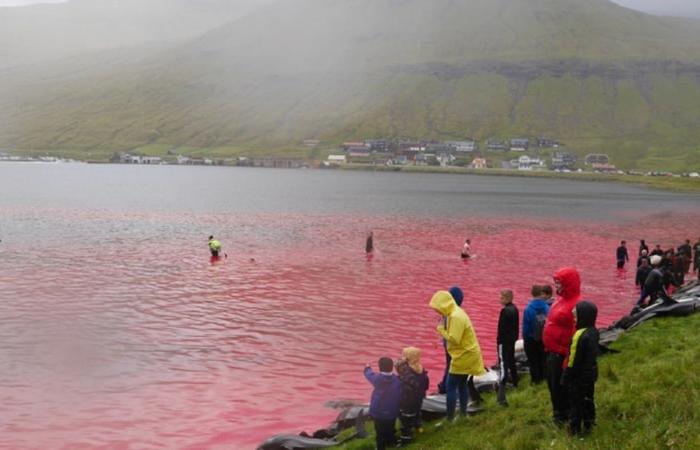 The Faroese Whaling Society said it was shocked by the killing of some 1,500 dolphins at a traditional annual dolphin festival in Denmark’s Faroe Islands in the North Atlantic.

The head of the association, Olafur Surdarberg, commented on the circulation of photos and videos on social media, showing the carcasses of scaly dolphins and the blood of one of the archipelagos islands being dyed with the blood of slaughtered dolphins.

“We have to remember that we are not alone on the face of the earth,” said Sordarberg. “On the contrary, the world today is much smaller and everyone walks with a camera in their pocket. It is a great opportunity for anyone who wants to harm our reputation.”

The president of the association expressed his conviction that the time had come to make the issue of dolphin fishing the subject of a political discussion.

The Danish press reported that the “Grindadrap” festival, which has been held annually since 1584, witnessed this year the slaughter of 1,428 dolphins at once.

The annual tradition of hunting whales and dolphins has been criticized by environmental activists around the world, with environmental group ORCA calling the practice a “crazy blood sport”.

But the Faroe Islands government says hunting is regulated to provide food to local communities and is carried out within the law, and that whales are not endangered.

These were the details of the news “Crazy blood sport” .. 1,5 thousand dolphins were slaughtered in a... for this day. We hope that we have succeeded by giving you the full details and information. To follow all our news, you can subscribe to the alerts system or to one of our different systems to provide you with all that is new.