Foreign purchase seizes opportunities for the decline in UAE shares 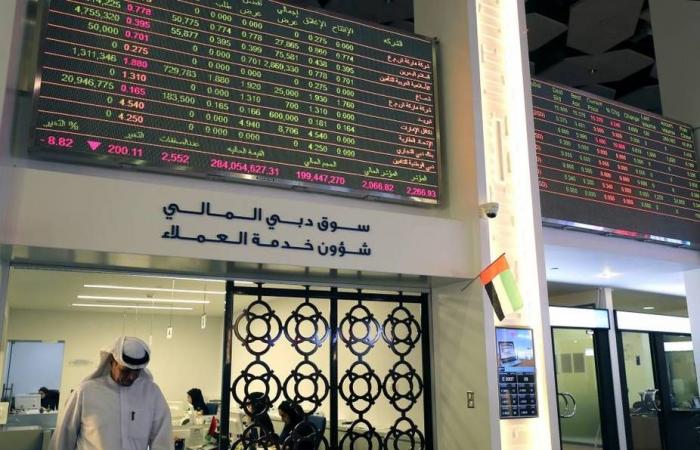 Calm dominated the local stock markets at the end of the mid-week session, to close the Abu Dhabi Securities Market index with a marginal decline of 0.04%, and the Dubai Financial Market index decreased by 0.27%, with the continued concentration of pressures from the leading shares in the banking sector.

Foreign investors seized the opportunity of the decline in general indicators, to enhance their investment portfolios by 88 million dirhams, amid sales from Gulf investors and citizens, with the control of the discrepancy over the orientations of institutions.

The Abu Dhabi Securities Exchange index settled with a marginal decline of 0.04%, equivalent to 3 points, to close at 7761.8 points, amid the varying performance of the sectoral indicators.

The market witnessed the bell of the inclusion of Response Plus Holding Company on the second market platform in the Abu Dhabi Securities Exchange, and the stock opened at 17 dirhams, and reached the level of 20 dirhams, to close at 12.5 dirhams, amid trading of 56.3 million dirhams. And «Reem Investments» among the private joint stock companies increased by 11.2%.

The Dubai Financial Market index decreased by 0.27%, equivalent to 7.9 points, to close at 2,880.9 points, affected by the decline in the “real estate” and “banks” sectors.

The investment and financial services sector rose 0.16%, interacting with the return of the “Dubai Financial Market” share to rise, as it rose by 0.9% to 1.11 dirhams, while “Shuaa” declined 0.85% to 0.699 dirhams, amid the stability of “Dubai Investments”.

These were the details of the news Foreign purchase seizes opportunities for the decline in UAE shares for this day. We hope that we have succeeded by giving you the full details and information. To follow all our news, you can subscribe to the alerts system or to one of our different systems to provide you with all that is new.