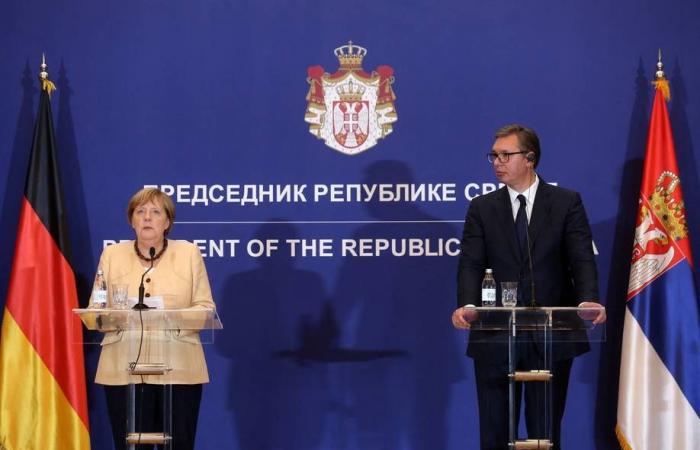 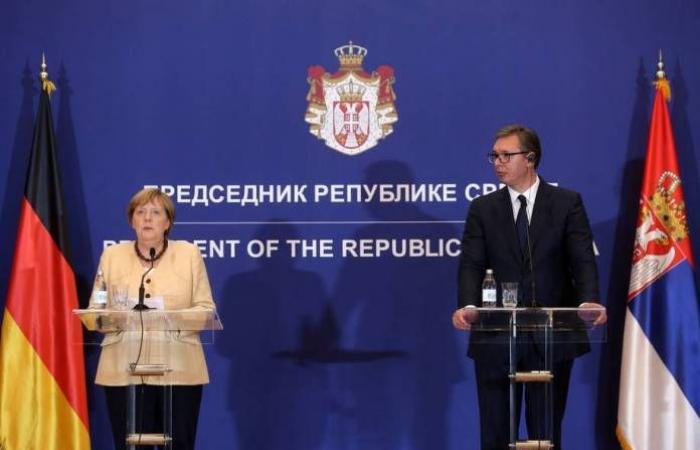 Belgrade – AFP
German Chancellor Angela Merkel announced during a visit to Belgrade on Monday that the accession of the Western Balkan countries to the European Union is in the bloc’s “absolute geostrategic interest” in the face of the influence of other powers in this region.
Merkel will conclude Tuesday in Albania a trip that she started on Monday in Serbia, one of her last foreign trips before she steps down in the wake of the elections scheduled for September 26.
“We Europeans, mainly members of the European Union, must always bear in mind that there is an absolute geostrategic interest for us to actually accept these countries into the European Union,” the German chancellor said after meeting in Belgrade with Serbian President Aleksandar Vucic.
“We can see that there are setbacks, and that there are also influence of many other regions in the world” over the Balkans, she added. We must always remember the geostrategic importance of the rapprochement of these countries with the European Union.”
If the Balkans have historically been the scene of a struggle for influence between the West and Russia, China’s influence on this region is becoming more and more apparent in recent years, and some analysts attribute this fierce competition for influence in the Balkans to European reluctance.
In Tirana, Merkel will meet Tuesday with the leaders of six countries in the region: Albania, Bosnia, Montenegro, North Macedonia, Kosovo and Serbia. These six countries have begun a process of rapprochement with the European Union, but each of them has come a different way on the path to joining the bloc.
The leaders in the race between these countries for European membership are Serbia and Montenegro, which began accession negotiations several years ago.
In March 2020, the European Union gave the green light to start accession negotiations with North Macedonia and Albania, but these negotiations have not yet begun, and Bosnia and Kosovo do not yet have candidate status.
Merkel acknowledged that these countries still have “a long way to go” to one day join the European Union, but called for more progress toward building a common economic market in the Balkans, a process initiated by Serbia, Albania and North Macedonia.
Slovenia, which currently holds the rotating presidency of the European Union, is preparing to hold a summit in October with the countries of the region with the aim of re-launching the enlargement process.

These were the details of the news Merkel: The accession of the Balkan countries to the European Union... for this day. We hope that we have succeeded by giving you the full details and information. To follow all our news, you can subscribe to the alerts system or to one of our different systems to provide you with all that is new.