Marshall survived the gallows and saved the Soviet Union 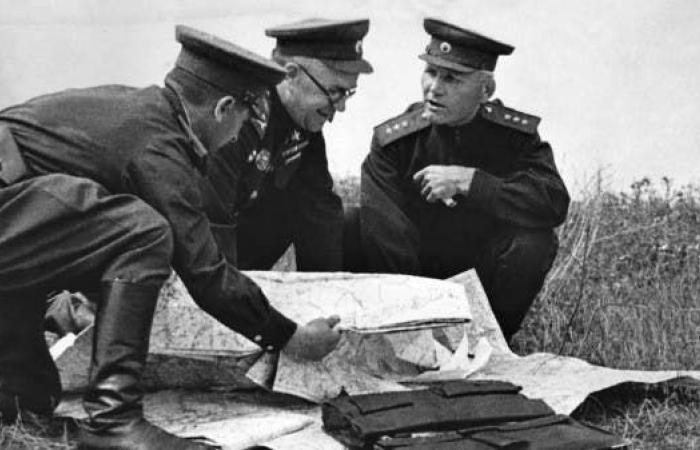 In the midst of World War II, on June 22, 1941, the Germans unleashed Operation Barbarossa, putting an end to the Molotov-Ribbentrop Treaty signed with the Soviet side since August 1939. With the beginning of Operation Barbarossa, millions of German soldiers entered Soviet territory in a massive way. Suddenly, they marched towards three main goals: Moscow because of its political and diplomatic status as the country’s capital, Leningrad, which was considered a symbol of communism and the Soviet Union, and Stalingrad, which was classified as a major transit point towards the oil wells in the Soviet East.

Although they experienced many military disasters at first, the Soviets managed to turn the tide of the war in their favor and succeeded in defeating the Germans before they could finally enter the capital, Berlin.

This Soviet victory was achieved thanks to the cunning of a number of military leaders of the Red Army. In addition to Georgy Zhukov, the name of Marshal Ivan Stepanovich Konev also emerged, who led the Red Army towards Berlin and was almost led to the gallows at the beginning of Operation Barbarossa.

Death sentence and a return to the battlefield

Konev, born on December 28, 1897, in the Vologda region, began his military career during the First World War, when the latter joined an artillery division. During the Russian Civil War that followed the Bolshevik Revolution, Konev fought in the Red Army against the armies of Alexander Kolchak in Siberia and also took up arms against the Japanese army that attempted to intervene in the far east of the Soviet Union. With the end of the Russian Civil War, Konev preferred to remain in the Red Army, and in the following years received numerous promotions, which led to him reaching the rank of major general.

With the beginning of Operation Barbarossa, Konev was given the honor of commanding the Nineteenth Army. On September 11, 1941, the latter was appointed commander on the Western Front, where he went through a difficult period during which he almost lost his life. During the month of October of the same year, Konev’s forces received a severe defeat at the hands of the Germans near Vyazma and incurred heavy losses, as about 300,000 Soviet soldiers were killed and wounded during the battles, and more than 500,000 others were captured.

Because of this defeat, Ivan Stepanovich Konev appeared before the court and would have almost received a death sentence had it not been for the intervention of Marshal Zhukov, who praised his qualities and demanded his return to the front.

Over the following years, Konev turned his failure with the start of Operation Barbarossa into a success. Appointed commander on the Kalinin Front, Konev led a massive attack on the German army on December 5, 1941, forcing the Germans to retreat more than 150 km from the besieged capital of Moscow. During the Battle of Kursk in the summer of 1943, Konev led several successful attacks, as a result of which he gained a reputation comparable to that of Marshal Zhukov in the Red Army. During the same period, he managed to defeat the Germans, forcing them to retreat to their borders and abandon important industrial areas such as Belgorod and Kharkov. (Kharkov).

Following his successes in the Battle of Korsun-Cherkasy between January and February 1944, Konev crossed his forces into Romania, becoming the first general to lead the Red Army outside the Soviet borders. Thanks to all these military successes, this veteran soldier received another promotion that made him a Marshal of the Soviet Army.

Although he did not receive the honor of leading the Red Army at the Battle of Berlin, Konev led the last major offensive of the Red Army on the European scene in World War II, where the latter took over the command of the army with the Prague Offensive in May 1945 and succeeded in capturing more than 800,000 German soldiers and liberating Czechoslovakia.

These were the details of the news Marshall survived the gallows and saved the Soviet Union for this day. We hope that we have succeeded by giving you the full details and information. To follow all our news, you can subscribe to the alerts system or to one of our different systems to provide you with all that is new.