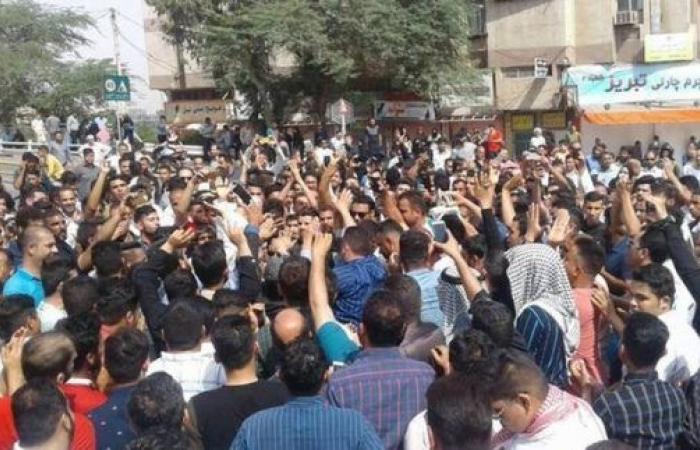 Hind Al Soulia - Riyadh - TEHRAN — Mobile internet services in Iran have been disrupted amid ongoing protests against a water crisis in the country's southwest.

At least three people — including a police officer — have been killed in clashes in Khuzestan, state media have reported.

Demonstrators have been calling for action to address the shortage of water in the oil-rich province for seven consecutive days.

Iran's authorities have blamed the water crisis on a severe drought, noting that rainfall in the region has decreased by almost 50 percent in the last year, leaving dams with dwindling water supplies.

Security forces have beefed up their presence in Tehran. At the capital's Azadi square, anti-riot police were seen stationed with armored vehicles.

A short video posted on Twitter by New York Times journalist Farnaz Fassihi showed people at a Tehran metro station chanting "death to the Islamic Republic" in a rare display of protest against the country's clerical elite.

In the town of Izeh, a video showed demonstrators chanting "Reza Shah, bless your soul," a reference to the king who founded the Pahlavi dynasty which was overthrown by the 1979 Islamic Revolution.

At night, some people in the capital vented their anger with chants against Supreme Leader Ayatollah Ali Khamenei, Reuters reported.

At least two young men have been shot dead in the protests. Officials have blamed armed protesters, but activists said on social media they were killed by security forces. On Tuesday, a police officer died in the port city of Bandar-e Mahshahr after being shot from a rooftop by "rioters," state media said.

Iran's ethnic Arab minority, who mostly live in the oil-rich Khuzestan province, have long said they face discrimination in the country. An Arab woman protester could be heard shouting at security forces in one video: "Sir! Sir! The demonstration is peaceful. Why do you shoot? No one took your land and water."

Iran is facing its worst drought in 50 years and the water crisis has affected households, agriculture and livestock farming, and led to power blackouts.

A video on social media showed a group of activists gathering outside the Tehran Interior Ministry to voice support for Khuzestan protesters.

"We call on law enforcement forces not to harm protesters calling have access to water," a prominent activist, Narges Mohammadi, said in the video.

Iran's economy has been crippled partly by sanctions imposed mainly on its oil industry by former US President Donald Trump in 2018, as well as the COVID-19 pandemic. Workers, including thousands in the key energy sector, and pensioners have protested for months, with discontent growing over mismanagement, high unemployment and an inflation rate of more than 50 percent.

There were at least 31 protests across Iran on Monday and Tuesday, including rallies by workers and farmers, according to the dissident Human Rights Activists News Agency (HRANA).

The governor of Khuzestan, Qasem Soleimani Dashtaki, promised to alleviate the water shortages within a year, which have affected at least 702 villages in the province, semi-official state media ISNA reported. — CNN with agencies

These were the details of the news Iran experiences internet shutdowns amid protests over water crisis for this day. We hope that we have succeeded by giving you the full details and information. To follow all our news, you can subscribe to the alerts system or to one of our different systems to provide you with all that is new.