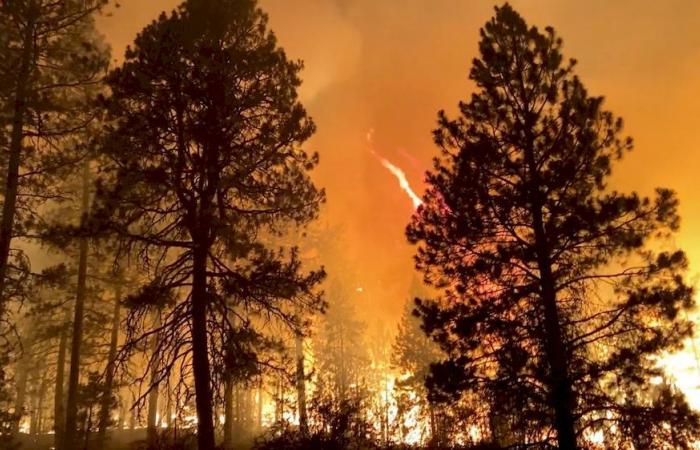 Hello and welcome to the details of ‘If you don’t leave, you’re dead’: Oregon wildfire forces hundreds from homes and now with the details

The so-called Bootleg fire had blackened more than 212,000 acres (85,793 hectares) by morning, destroying 21 homes and 54 other structures, with firefighters managing to hack containment lines around just 5 per cent of its perimeter, according to state and federal authorities.

Ranking easily as the largest of at least 10 active wildfires burning across the Pacific Northwest, the Bootleg has spread mostly unchecked in and around the Fremont-Winema National Forest, about 250 miles (400 km) south of Portland, since erupting July 6.

As of Wednesday, flames were threatening 1,926 dwellings, the Northwest Interagency Coordination Center in Portland reported. Nearly 400 of those homes have been ordered evacuated, Oregon Forestry Department officials said. No serious injuries or fatalities have been reported.

A pall of thick haze settled over Klamath Falls to the southwest, where the local fairgrounds were turned into a Red Cross evacuation center.

Tim McCarley, one of the evacuees, told Reuters earlier this week that sheriff’s deputies and state troopers showed up at his home just as “sparks and embers were coming down,” warning his family: “If you don’t leave, you’re dead.”

“This is my first wildfire and I’m going to tell you, it is scary,” said fellow evacuee Sarah Kose. “You don’t know if you’re going to be the one that loses your house, or you sit there and you watch your neighbor lose their house, and there’s nothing you can do about it.”

More than 1,300 personnel were assigned to battle the wildfire, which is the seventh largest on record in Oregon since 1900, according to state forestry figures.

By comparison, two Oregon wildfires have measured a half-million acres or more – the 2012 Long Draw and the 2002 Biscuit. Just eight others, including the Bootleg, have surpassed 200,000 acres, records show.

Coming in the midst of record-shattering temperatures across the West, the Bootleg fire has been stoked by hot, dry, windy weather and vegetation desiccated by prolonged drought – a combination that has accelerated the spread of the flames, officials said.

In all, 60 large fires have consumed more than 1 million acres (404,680 hectares) across 12 states this season, according to the National Interagency Fire Center in Boise, Idaho.

Last year, dozens of late-summer wildfires, many of them sparked by dry-lightning storms, killed more than three dozen people and charred more than 10.2 million acres (4.1 million hectares) in California, Oregon and Washington.

Earlier in the week, flames burning along a high-voltage power corridor connecting Oregon’s electricity grid with California’s threatened energy supplies, prompting energy conservation alerts on the California side. The alerts were withdrawn as the heat wave eased. — Reuters

These were the details of the news ‘If you don’t leave, you’re dead’: Oregon wildfire forces hundreds from homes for this day. We hope that we have succeeded by giving you the full details and information. To follow all our news, you can subscribe to the alerts system or to one of our different systems to provide you with all that is new.