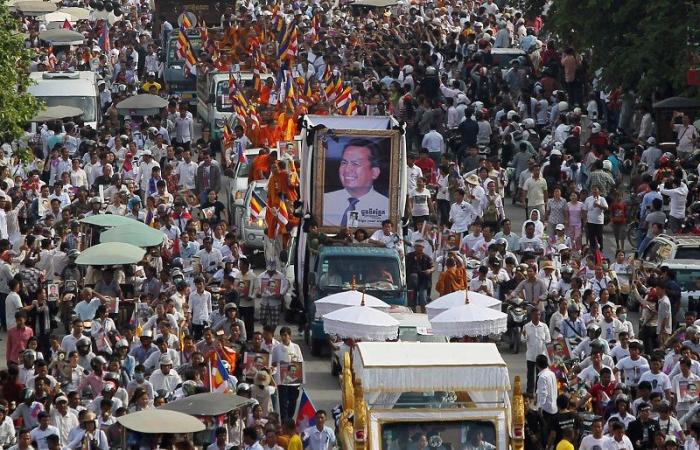 PHNOM PENH, July 10 ― As the family of slain Cambodian activist Kem Ley rebuild their lives in Australia, his youngest son, born just months after the assassination, acts as a human timepiece measuring the years since the five brothers lost their father.

Kem Ley, a popular analyst and critic who dabbled in grassroots politics, was shot at point-blank range at a gas station cafe in Phnom Penh in 2016.

An unemployed former soldier confessed to the killing and claimed the motive was an unpaid debt, in a trial critics say was a political cover-up.

On the eve of the fifth anniversary of his death today, his widow Bou Rachna visited a Melbourne temple to pray.

“I always tell my sons about the story of their Dad, I hope they will remember forever the good actions of their father,” she told AFP.

His work bag and laptop is on display in the family's Melbourne home along with his portrait and a pot of incense sticks.

Bou Rachna was five months pregnant at the time of the killing and named her fifth son, Kem Ley Vireakboth, after her late husband.

Kem Ley junior is now five-years-old and has shown signs of autism.

“So even though we keep talking to him (about his dad) he still does not understand yet,” his mother said.

The family moved to Australia in 2018 after being granted refugee status.

The widow has struggled to financially support her children ― the eldest is at university and was ineligible for a government-funded degree and must pay full tuition because the family are yet to gain citizenship.

“It's really difficult for me as a woman who has to look after five children in this situation,” she said, adding that many Khmer-Australians have shown tremendous kindness to her family.

“We have changed countries and have found a good place to live. We don't feel pressure and intimidation.”

Kem Ley was a vocal critic of Cambodian politicians of all stripes but he was particularly scathing about the corruption that blights the country.

Shortly before his murder he gave an interview about an investigative report he had written that detailed some of the millions of dollars allegedly amassed by the family of long-serving Prime Minister Hun Sen.

The Cambodian government strongly denied any role in the killing.

Ex-soldier Oeuth Ang pleaded guility and was sentenced to life imprisonment after a brief trial.

The suspect, who initially told police his name was “Chuob Samlab” or “meet to kill,” allegedly confessed to the murder and claimed his motive was an unpaid debt of $3000 ― a claim Bou Rachna disputes.

“This murder could not be done by just two or three people, there are a lot of people behind this murder,” the widow said.  “Time will tell everything.”

Human rights groups say key aspects of the case were never properly investigated and raised concerns about prosecutors' priorities to secure a quick conviction rather than carry out a comprehensive probe into other possible conspirators.

“No one believes for a second that scapegoat Oeuth Ang was anything more than a stooge set up to spout absurdities in court and take the rap for a political killing,” Human Rights Watch deputy Asia director Phil Robertson said.

“It also sends the message that killing human rights defenders for their activism in Cambodia is tolerated,” Cambodian Center for Human Rights Chak Sopheap said.

Cambodian justice ministry spokesman Chin Malin said that although courts have completed the case and convicted a murderer, family members or other parties could ask authorities to reopen the case if they have new evidence.

“They have just spoken out, they made allegations and demands, but they don't have contradictory evidence and by law, such things are not acceptable,” he told AFP.

“They say the same thing every year and it's just a political message - there is no evidence.”

Hun Sen is one of the world's longest-serving leaders and has been in power for 36 years, presiding over democratic regression, a sketchy human rights record and a pivot towards China.

In 2018, the country's main opposition party was dissolved and many of its MPs fled the country. Some members have since been put on trial for allegedly agitating for the ruling party to be toppled.

This morning in Phnom Penh, there was a heavy police and security guard presence at the petrol station cafe where he was killed ― and no sign of mourners planning to mark the occasion.

But from afar, Bou Rachna keeps her husband's activism and memory alive, donating to youth democracy campaigners in Cambodia.

These were the details of the news Family of slain Cambodia activist Kem Ley mark five year anniversary for this day. We hope that we have succeeded by giving you the full details and information. To follow all our news, you can subscribe to the alerts system or to one of our different systems to provide you with all that is new.