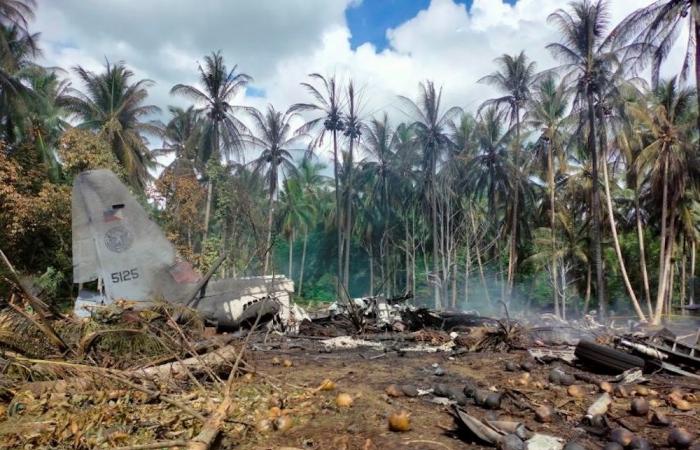 Hello and welcome to the details of Philippine military plane crash claims 45, dozens injured and now with the details

COTOBATO (Philippines), July 4 — At least 45 people were killed and dozens injured today when a Philippine military aircraft carrying troops crashed and burst into flames after missing the runway in the country’s south, officials said.

Nearly a hundred people, most of them recent army graduates, were on the C-130 Hercules transport plane which was trying to land on Jolo island in Sulu province around midday.

Some of the soldiers were seen jumping out of the plane before it hit the ground and exploded into flames, said Major General William Gonzales, commander of the Joint Task Force-Sulu.

It was one of the country’s deadliest military aviation accidents.

“This is a sad day but we have to remain hopeful,” Gonzales said in a statement.

“We enjoin the nation to pray for those who are injured and those who have perished in this tragedy.”

Among the dead were 42 soldiers and three civilians, according to the Armed Forces of the Philippines. Forty-nine military personnel and four civilians were also injured and taken to hospital.

Five members of the military are still missing.

Photos of the crash site released by the Joint Task Force-Sulu showed the damaged tail and the smoking wreckage of the fuselage’s back section laying near coconut trees.

Images published by local media outlet Pondohan TV on its Facebook page showed the wreckage engulfed in flames and a plume of thick black smoke rising above houses located near the site.

Armed Forces Chief General Cirilito Sobejana said the aircraft was carrying troops from Cagayan de Oro on the southern island of Mindanao when it “missed the runway” as it tried to land on Jolo.

The plane tried to “regain power but didn’t make it”, he told local media.

High school student Almar Hajiri Aki told AFP he was standing beside a road when he heard a “loud explosion” behind him.

“I thought our house was hit,” said the 21-year-old, who rushed with his neighbours to help pull soldiers from the wreckage.

Air force spokesman Lieutenant Colonel Maynard Mariano said the cause of the crash would be investigated, while armed forces spokesman Major General Edgard Arevalo told DZBB radio that it was being treated as an accident rather than an attack.

Most of the passengers had recently graduated from basic military training and were being deployed to the restive island as part of a joint task force fighting terrorism in the Muslim-majority region.

They were supposed to report for duty today, Gonzales said.

The military has a heavy presence in the southern Philippines where militant groups, including the kidnap-for-ransom outfit Abu Sayyaf, operate.

C-130s have been the workhorses of air forces around the world for decades, used to transport troops, supplies and vehicles. They are also often deployed to deliver humanitarian assistance and disaster relief.

The Hercules that crashed Sunday has the same tail number as one acquired from the United States and delivered to the Philippines earlier this year.

Senator Richard Gordon said it was the fourth military aircraft accident this year with “mass casualties”.

“Are we buying defective crafts... (with) the people’s money?” he tweeted.

Lorenzana said the previous mishaps were being probed and dismissed speculation about the causes as “disrespectful” to victims and their families.

Presidential spokesman Harry Roque described the accident as “very unfortunate”, and the US embassy Charge d’Affaires John Law offered “sincerest condolences” to the families of the victims.

Sunday’s accident comes after a Black Hawk helicopter crashed last month during a night-time training flight, killing all six on board. The accident prompted the grounding of the Philippines’ entire Black Hawk fleet. — AFP

These were the details of the news Philippine military plane crash claims 45, dozens injured for this day. We hope that we have succeeded by giving you the full details and information. To follow all our news, you can subscribe to the alerts system or to one of our different systems to provide you with all that is new.