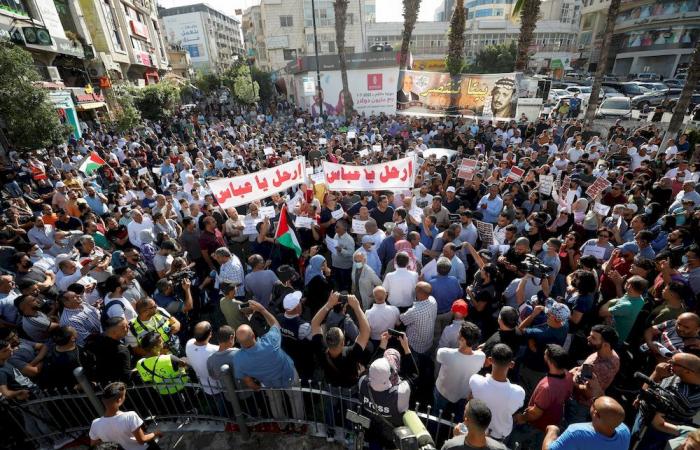 RAMALLAH (Palestinian Territories), July 4 — Hundreds of Palestinians demanded the resignation of president Mahmud Abbas at a West Bank protest yerday sparked by last month’s death of an activist in custody.

Relatives of Nizar Banat, who died after security forces stormed his home and violently arrested him, were at the forefront of the protest in Ramallah where Abbas’s Palestinian Authority (PA) is based.

Banat’s mourning mother held up a portrait of her son.

Demonstrators also carried pictures of Banat, a vocal critic of alleged corruption within the PA, while others held up a huge banner that carried the words “Abbas Leave”, an AFP reporter said.

“This rally is a message of allegiance to Nizar Banat and to the authorities, who must bring to justice those responsible for his death,” Hassan Khreishah, a former head of the Palestinian Legislative Council, told AFP.

A counter-protest organised by Abbas’s Fatah faction was meanwhile held in the city of Hebron to express support for the Palestinian leader.

The 43-year-old had registered as a candidate in Palestinian parliamentary elections that were set for May, until Abbas postponed them indefinitely.

According to an autopsy, he had been beaten on the head, chest, neck, legs and hands, with less than an hour elapsing between his arrest and his death.

Banat’s family said Monday they would reject the conclusions of an official inquiry and instead called for an international investigation.

UN Middle East peace envoy Tor Wennesland said the “perpetrators must be brought to justice”, while the EU called for a “full, independent and transparent investigation”.

The United States said it was “deeply disturbed” by the death, and urged a transparent investigation. — AFP

These were the details of the news Palestinians demand Abbas quit at Ramallah protest for this day. We hope that we have succeeded by giving you the full details and information. To follow all our news, you can subscribe to the alerts system or to one of our different systems to provide you with all that is new.