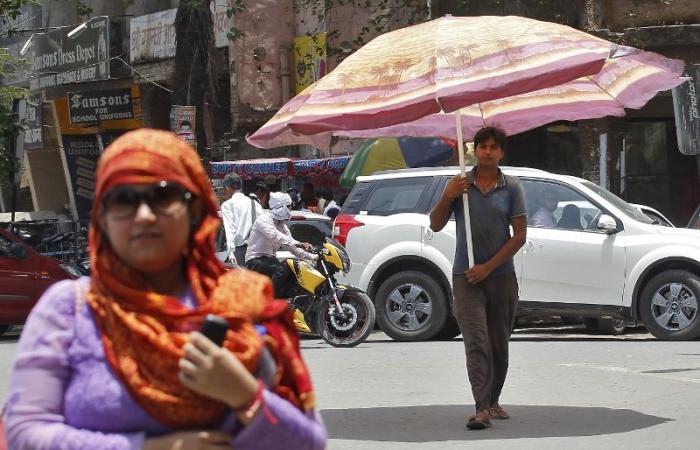 NEW DELHI, July 2 — Tens of millions of people in India were suffering today under a severe heatwave that has pushed the temperature to a nine-year high in Delhi as monsoon rains run behind schedule.

Heatwaves have killed over 6,500 people in the world’s second-most populous nation since 2010, and scientists say climate change is making them harsher and more frequent.

Daytime temperatures were above 40 degrees Celsius for the fourth consecutive day Friday across the states of Rajasthan, Haryana and New Delhi.

Today, the temperature again shot up to 41 degree Celsius in the city of 20 million.

Temperatures have remained more than seven degrees Celsius above normal for this time of the year, prompting India’s weather office to classify it as “severe extreme heat”.

India Meteorological Department said the mercury will stay above 40 degrees for the coming week because of the late arrival of the southwest monsoon and a hot wind known as the Loo blowing in from the desert state of Rajasthan and Pakistan.

The weather department has issued a heatwave alert for the region, with forecasters also saying some isolated places will witness thunderstorms.

The intense heat has driven up power consumption as more and more people turned to air-conditioners and air coolers.

Delhi’s power consumption peaked to nearly 7,000 megawatts (MW) this week, 10 to 15 per cent higher than the average demand at this time of the year.

In Punjab in the north, authorities announced a two-day weekly closure of industrial units and reduced office hours for its employees after electricity demand topped 15,000 megawatts due.

Forecasters predict that the annual rains will not hit New Delhi before July 7, making it the most delayed monsoon in the national capital since 2006.

The deadliest year for India was 2015 when over 2,000 were killed by intense heat.

Currently just five per cent of Indian households have air conditioning compared to 90 per cent in the United States and 60 per cent in China.

But the market is forecast to boom in the coming years, driving up energy consumption in what is already the world’s third-largest emitter of carbon dioxide.

The refrigerants inside AC units also exacerbate global warming, while the heat that the machines generate make cities even hotter.

Parts of Delhi and elsewhere regularly see scuffles when tankers arrive to deliver water. In 2019 Chennai made international headlines when the southern city ran out of water entirely. — AFP

These were the details of the news Tens of millions sizzle in India’s severe heatwave for this day. We hope that we have succeeded by giving you the full details and information. To follow all our news, you can subscribe to the alerts system or to one of our different systems to provide you with all that is new.