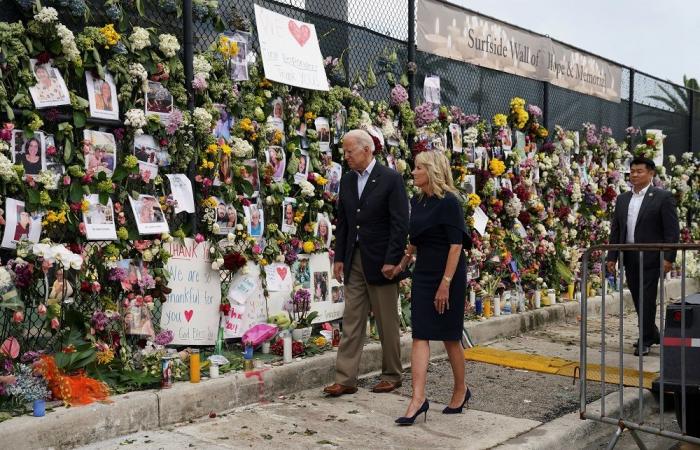 Hello and welcome to the details of Biden mourns with Florida families, search of collapsed condo ruins resumes and now with the details

SURFSIDE, July 2 ― Rescue-and-recovery teams resumed picking through the rubble of a partially collapsed Florida condominium complex yesterday, nearly 15 hours after the search of scores of victims believed buried in the rubble a week ago was suspended for safety concerns.

The renewed search effort began shortly after a visit to the site by US President Joe Biden, who pledged federal assistance and offered comfort to the families of those killed and missing in the June 24 disaster.

Biden, whose personal experience with tragedy has marked his political career, travelled to Florida to reprise the role of “consoler-in-chief” a week after the 12-story Champlain Towers South condo partially caved in overnight as residents slept.

The confirmed death toll stood at 18 after the recovery of six more victims whose deaths were confirmed on Wednesday, including two children, aged 4 and 10, Miami-Dade County Mayor Daniella Levine Cava said yesterday.

Another 145 people remained missing and feared trapped in the heaps of pulverized concrete, splintered lumber and twisted metal. Cava announced that the search of the mounds of rubble restarted at about 4:45 p.m. local time once authorities determined that it was sufficiently safe to do so.

The operation, which had continued around the clock since shortly after the collapse, was halted at about 2am yesterday when movement detected in the debris field raised concerns that a portion of the tower still standing might collapse onto search teams.

Biden acknowledged that hopes of finding any survivors dimmed with each passing day, but said it was possible someone might still be pulled out alive.

“Hope springs eternal,” he said at a news conference at the nearby St. Regis hotel after meeting privately with affected families and before viewing flowers and posters woven into a fence as an impromptu memorial near the ruins.

Cava said authorities were proceeding with plans to safely demolish the section of the 12-floor condo that was still standing while teams pressed on with their search efforts. ― Reuters

These were the details of the news Biden mourns with Florida families, search of collapsed condo ruins resumes for this day. We hope that we have succeeded by giving you the full details and information. To follow all our news, you can subscribe to the alerts system or to one of our different systems to provide you with all that is new.