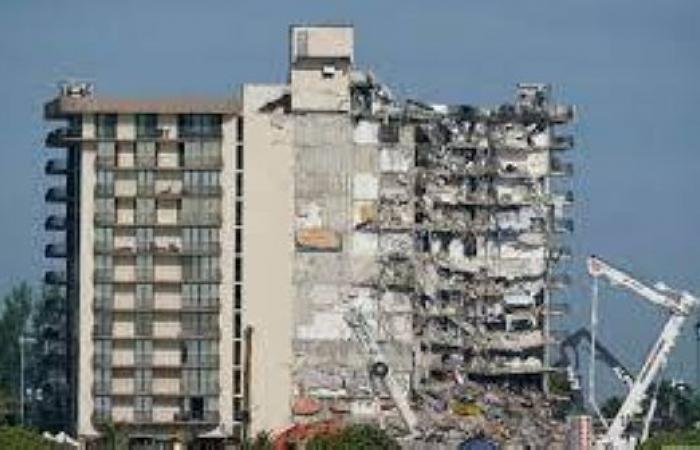 Hind Al Soulia - Riyadh - MIAMI, Florida — Rescue efforts at the condominium that partially collapsed in Florida were paused on Thursday out of concern about the stability of the remaining building, officials said.

Crews had seen expansions in cracks they were monitoring, including movement in a large column hanging from the structure “that could fall and cause damage to supporting columns" in the underground parking garage, Miami-Dade Fire Rescue Chief Alan Cominsky said.

In addition, they noticed movement in the debris pile and slight movement in some concrete floor slabs “that could cause the additional failure of the building,” he said.

Officials will work with structural engineers and other experts to “develop options” to continue rescue operations, Cominsky said.

It came the same day that US President Joe Biden was expected to meet with crews and relatives of those missing.

“This is life and death," Biden said a briefing about the collapse. “We can do it, just the simple act of everyone doing what needs to be done makes a difference."

The president said he believed the federal government has “the power to pick up 100 percent of the cost” of the search and cleanup and urged the local officials to turn to Washington for assistance.“You all know it, because a lot of you have been through it as well," Biden said. "There’s gonna be a lot of pain and anxiety and suffering and even the need for psychological help in the days and months that follow. And so, we’re not going anywhere.”

Searchers going through the ruins found the remains of six people Wednesday, bringing the number of confirmed dead to 18. The number of residents unaccounted for stands at 145.

The condominium collapsed last week but the cause is still under investigation.

A 2018 engineering report found that the building's ground-floor pool deck was resting on a concrete slab that had “major structural damage” and needed extensive repairs. The report also found “abundant cracking" of concrete columns, beams and walls in the parking garage. — Euronews

These were the details of the news Rescue efforts paused in Florida over concerns remaining building could fall for this day. We hope that we have succeeded by giving you the full details and information. To follow all our news, you can subscribe to the alerts system or to one of our different systems to provide you with all that is new.