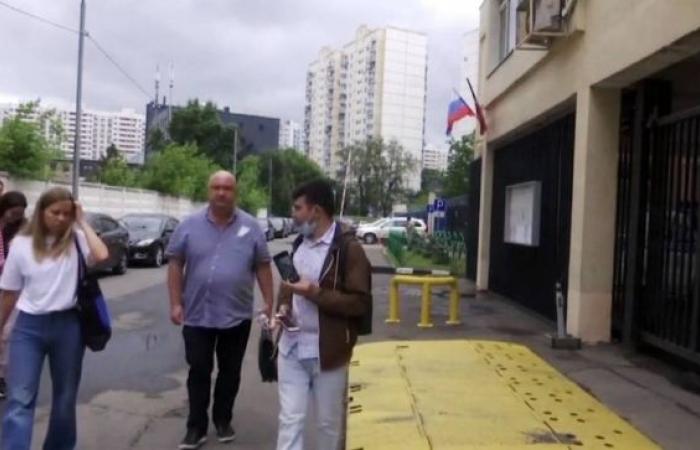 Police searched the apartments of Roman Badanin, chief editor of the Proekt investigative online outlet, and Maria Zholobova, one of its journalists.

Officers also raided the home of the parents of Badanin's deputy, Mikhail Rubin. Rubin was detained near Zholobova's residential building and brought to his parents' apartment.

Proekt said in its account in the Telegram messaging app that the raids occurred after the outlet promised to release an investigation into Russia's interior minister, Vladimir Kolokoltsev, and his alleged wealth. The outlet published the story shortly after the searches started.

Proekt later said that the raids stemmed from a defamation case over a 2017 documentary Badanin and Zholobova worked on for the independent TV channel Dozhd, about a St. Petersburg businessman with alleged ties to organized crime.

All three journalists were taken in for questioning after the raids and later let go. Badanin was initially reported to be a suspect in the case, but was questioned as a witness, according to a rights group involved in his defense.

He told reporters after the questioning that the Proekt team believes “attention” from law enforcement is connected to the investigation into Kolokoltsev.

“We consider these actions an attempt at censorship and at pressuring our colleagues, and demand a cease in investigative proceedings against the journalists of Proekt,” Proekt said in an online statement.

Russian authorities have turned up the pressure on independent news media in recent months. Two popular independent outlets, Meduza and VTimes, have been designated “foreign agents" — a label slapped on groups, news outlets or individuals that receive foreign funding.

The designation implies additional government scrutiny and has a strong pejorative connotation that could discredit those that receive it.

VTimes shut down this month after being added to the list of "foreign agents," while Meduza launched a crowd-funding campaign.

Russia has used the law to levy heavy fines on US-funded Radio Free Europe/Radio Liberty for failing to identify its material as produced by “foreign agents.” The broadcaster has asked the European Court of Human Rights to intercede.

Kremlin spokesman Dmitry Peskov on Tuesday rejected the idea that raids targeting investigative journalists could be viewed as retribution for their work, saying that “legal grounds for such actions exist.”

Peskov admitted, however, that the Kremlin doesn't know why police searched the apartments of Proekt journalists.

Natalia Zviagina, Amnesty International’s Moscow Office Director, called the raids in a statement “another brazen attack on independent media and freedom of expression in Russia, and part of a systematic cleansing of any critical voices exposing the malpractices of those in power in the country.”

"We demand an immediate termination of all criminal libel proceedings against journalists and an end to the state harassment of independent Russian media,” Zviagina said. — Euronews

These were the details of the news Russia targets investigative journalists with raids amid independent media crackdown for this day. We hope that we have succeeded by giving you the full details and information. To follow all our news, you can subscribe to the alerts system or to one of our different systems to provide you with all that is new.