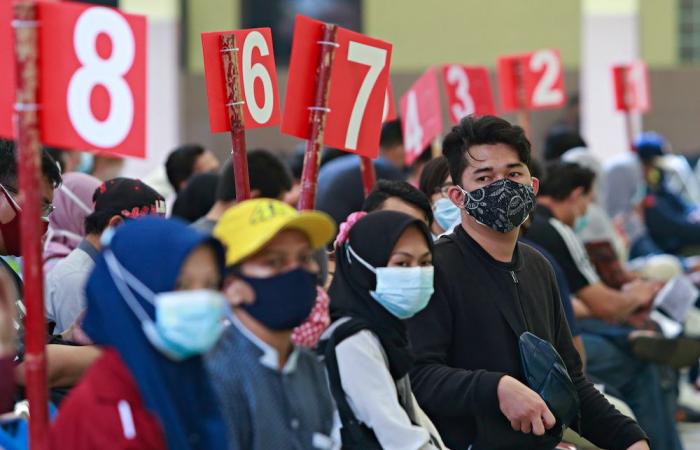 President Joko Widodo said authorities were mulling whether to tighten restrictions for one week or two weeks and urged the public to remain vigilant and focus less on the health of the economy.

“Today it will be finalised, because the spike is very high,” the president, better known as Jokowi, told a business event, referring to the emergency protocols.

“I ask that we all be careful and don’t let our guard down. Don’t just talk about the economy, while we don’t see the health aspect,” Jokowi said.

Movement curbs were tightened last week in so-called “red zone” areas where cases have jumped, but health experts said those were insufficient.

Social mobility and the presence of highly transmissible variants has been blamed for a surge that has pushed many hospitals to their limits.

Bed occupancy ratio was at 72 per cent nationally, Jokowi said, although some local authorities have reported rates far higher, including Jakarta.

In a bid to halve the current daily cases to below 10,000, Indonesia is proposing tighter restrictions on movement and air travel, a ban on restaurant dining and closure of non-essential offices, according to a government document seen by Reuters.

The proposals, which were preliminary and have yet to be endorsed, were made by the coordinating ministry for maritime affairs and investment and would apply from July 3 to 20, on the islands of Bali and densely populated Java.

The document recommends critical sectors remain open but for malls to close and a work from home policy for non-essential workers.

Jokowi also pledged to expedite vaccinations to one million doses per day in July and two million in August, up from what he said was about 200,000 to 300,000 a day at present.

“There is no bargaining”, Jokowi added.

Just 13 million people have received two vaccine shots in Indonesia. Of its more than 270 million people, 181.5 million are targeted for immunisation.

The president had previously resisted calls from health experts for a full lockdown and warned last week that curbs should be implemented that avoid “killing” the economy.

But Hasbullah Thabrany, chief of the Indonesian Health Economic Association, said more comprehensive measures were necessary and the economy would not suffer badly.

“No restrictions will kill the people’s economy. It just pauses economic activities to keep the virus at bay,” he said. — Reuters

These were the details of the news Indonesia considers broader curbs as coronavirus crisis deepens for this day. We hope that we have succeeded by giving you the full details and information. To follow all our news, you can subscribe to the alerts system or to one of our different systems to provide you with all that is new.