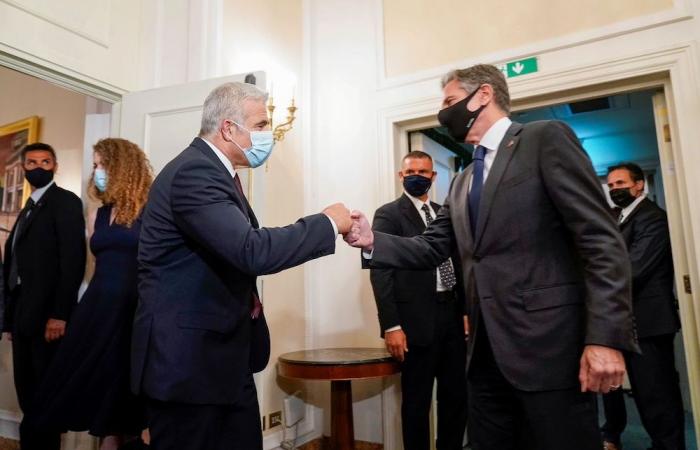 ROME, June 28 — Israel’s foreign minister on Sunday voiced concern over US diplomacy with Iran but promised a less confrontational approach, in the new government’s first high-level talks with the Jewish state’s closest ally.

Foreign Minister Yair Lapid, a centrist who masterminded a coalition that this month unseated veteran right-wing leader Benjamin Netanyahu, flew to Rome to meet US Secretary of State Antony Blinken who is on a European tour.

Lapid said he was ready to work with the United States to minimise conflict with the Palestinians following bloodshed last month — but made clear his worries about President Joe Biden’s push to rejoin a nuclear agreement with Iran.

“Israel has some serious reservations about the Iran nuclear deal that is being put together in Vienna,” Lapid said as he opened talks with Blinken at a hotel in the Italian capital.

“We believe the way to discuss those disagreements is through direct and professional conversation, not in press conferences,” he added.

Lapid did not mention Netanyahu by name but drew a clear contrast with the former Israeli leader, who openly aligned himself with the rival Republican Party as former US president Barack Obama negotiated the Iran deal in 2015.

“In the past few years mistakes were made. Israel’s bipartisan standing was hurt. We will fix those mistakes together,” Lapid said.

The United States has been holding indirect talks with Iran led by European allies in Vienna in the hope of rejoining the nuclear deal that was trashed by Biden’s predecessor Donald Trump.

Biden and Blinken argue that the agreement was working, as Iran had drastically scaled back its sensitive nuclear work, until Trump withdrew and imposed sweeping sanctions in 2018.

Israel has pressed for a more hawkish approach, seeing the clerical state in Tehran as its primary enemy, including through its support of militant groups such as Hamas and Hezbollah.

Lapid described the one-hour meeting as “good” and US officials said they were warm and constructive, with promises to keep up communication.

Blinken said the United States would work closely with the new Israeli government led by Prime Minister Naftali Bennett, a hardliner who leads a motley coalition united in the desire to oust Netanyahu.

“As the closest of friends do, we will have occasional differences,” Blinken said.

“We have the same objectives. Sometimes we differ on the tactics,” he said.

Biden kept Netanyahu at arm’s length after entering the White House in January but his administration has been quick to reach out to the new government.

Biden will also meet Monday at the White House with Israeli President Reuven Rivlin, who holds a mostly ceremonial role and will leave office on July 5.

Biden and Blinken are eager to preserve a fragile ceasefire that took effect on May 21 between Israel and Hamas, which controls the Gaza Strip, after the worst fighting since 2014.

The bloodshed triggered some of the strongest criticism of Israel in memory in the US Congress, with some members of Biden’s Democratic Party accusing Netanyahu of excessive force and of triggering the crisis by backing far-right Jewish groups that want to change the delicate status quo in the holy city of Jerusalem.

Netanyahu has already pounced on Lapid’s interactions with Blinken, recently posting a video in English on social media calling the new government “so dangerous” and saying Israel must reserve the right to act alone.

Following his visit to Rome, Lapid will head to the United Arab Emirates, one of four Arab nations that agreed last year to normalise relations with Israel in what Netanyahu hailed as a crowning achievement.

Lapid discussed the reconciliation with Blinken, who earlier in the day placed a call to Sudan’s Prime Minister Abdalla Hamdok, whose transitional government has been on the defensive for promising under pressure from Trump to establish ties with Israel.

With tensions still high after last month’s violence, sharp disagreements within the Israeli coalition and political uncertainties lingering within the Palestinian Authority, the Biden administration has made clear it is not rushing to make any grand Middle East peace initiatives.

Blinken, speaking in Paris on Friday at a forum on the youth-oriented Brut network, called for confidence-building measures and a halt of provocations in hopes of eventually working towards a two-state solution between the Israelis and Palestinians.

“I don’t think the conditions are there yet. We have to work on them and we will.” — AFP

These were the details of the news Israel’s new FM tells US of Iran concerns but promises to work together for this day. We hope that we have succeeded by giving you the full details and information. To follow all our news, you can subscribe to the alerts system or to one of our different systems to provide you with all that is new.