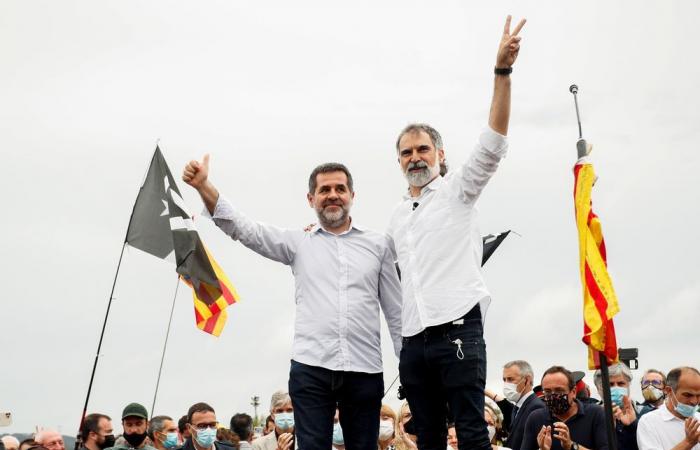 MONTBLANC (Spain), June 27 — He spent three years and eight months behind bars for his involvement in Catalonia’s 2017 failed independence bid. But Jordi Cuixart says he has no regrets, days after being pardoned by Spain.

One of nine Catalan separatist leaders freed on Wednesday as a gesture of “reconciliation”, Cuixart says the olive branch will not resolve the separatist crisis in this wealthy northeastern region of Spain.

“These pardons don’t reflect a desire to resolve the political conflict,” says the 46-year-old who heads Omnium Cultural, one of the region’s biggest grassroots pro-independence groups.

Speaking to AFP, Cuixart pointed to widespread criticism of their imprisonment from NGOs like Amnesty International as a factor behind the release of the separatists, but said what tipped the balance was that “our being in prison was creating problems for the Spanish state”.

Cuixart was arrested on October 16, 2017 after a demonstration outside a regional government building during which several police vehicles were destroyed.

In 2019, he was sentenced to nine years in prison for sedition.

The image of Cuixart addressing protesters while standing on a police vehicle remains one of the enduring images of the failed independence bid which sparked Spain’s worst political crisis in decades.

The prisoners were serving between nine and 13 years each for their role in holding a referendum banned by Spain’s courts and that was marred by police violence.

And after much thought while in prison, Cuixart says he has almost no regrets.

“I don’t regret anything except the violence that was inflicted (by police) on ordinary citizens,” he said, blaming the Spanish state for all the unrest.

Others have been slightly more self-critical.

Oriol Junqueras, deputy head of the Catalan government at the time of the crisis and the prisoner serving the longest sentence of 13 years, recently admitted the separatists made mistakes back in 2017.

Even so, Cuixart believes that the talks between Madrid and Catalonia’s separatist leadership, which are to resume soon, may end up being a “turning point”.

“I don’t see Spanish society as being ready for progress on autonomy, but politicians are responsible for engaging in dialogue,” said Cuixart, who has a salt-and-pepper beard and wears his hair in a longish curly mullet.

A fervent advocate of the right to self-determination, a key separatist demand, he is nonetheless aware that the central government remains categorically opposed to such an idea.

While he missed his children, the youngest of whom was born while he was behind bars, Cuixart said he has fond memories of prison — although he was held in a semi-open regime and able to leave regularly.

Now totally free, he is enjoying his first days of real freedom in a small village about 100 kilometres (60 miles) west of Barcelona, where his family has a house and where all the locals recognise him, his face being very well-known within Catalan society.

He says his time in jail has made him stronger.

“They wanted me to lose everything but the only thing I lost was fear. I am not afraid of the Spanish state,” he said defiantly.

“Will we ever have a Catalan Republic? If that’s what Catalans want, it’s very likely it will happen one day.” — AFP

These were the details of the news ‘No regrets’ says pardoned but defiant Catalan separatist for this day. We hope that we have succeeded by giving you the full details and information. To follow all our news, you can subscribe to the alerts system or to one of our different systems to provide you with all that is new.