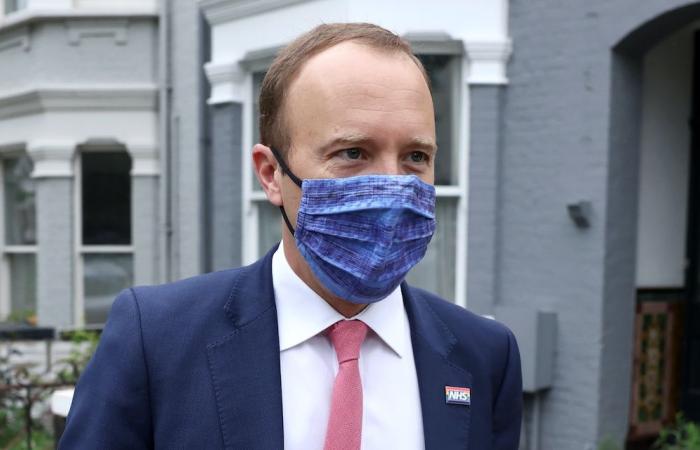 The frontman for Britain’s response to the pandemic, particularly the nationwide vaccine roll-out, quit in a letter to Prime Minister Boris Johnson.

“We owe it to people who have sacrificed so much in this pandemic to be honest when we have let them down as I have done by breaching the guidance,” he wrote.

“The last thing I would want is for my private life to distract attention from the single-minded focus that is leading us out of this crisis.”

Johnson said he was sorry to receive Hancock’s resignation, and that he should be “immensely proud” of his service.

His Downing Street office later said that Queen Elizabeth II had approved the appointment of Sajid Javid MP as his replacement.

Johnson had initially stood by his health secretary after Hancock admitted breaking Covid social distancing rules, when at the same time he was urging the public to stick by the measures.

Opposition parties have accused the government of hypocrisy over breaches of lockdown rules which have seen many members of the public slapped with fines.

Hancock conceded he had let the public down after The Sun newspaper published a security camera still obtained apparently from a whistleblower showing him kissing the aide in his office on May 6.

Both she and Hancock are married, and first met at university.

Last week, Hancock rejected criticism of his handling of the Covid pandemic after private WhatsApp exchanges emerged in which Johnson appeared to describe him as “hopeless”.

He has also previously faced allegations that he lied to Johnson and awarded a contract to an unqualified friend.

And he has faced further questions about his ownership of shares in a family company that won a Covid-related contract from his ministry last year.

But Johnson praised Hancock for his role in Britain’s successful vaccine rollout, which he called “one of the greatest successes of the modern state”.

“It has been your task to deal with a challenge greater than faced by any of your predecessors and in fighting Covid you have risen to that challenge — with abundant energy, intelligence and determination that are your hallmark,” he added.

Hancock’s replacement Javid has already held two of the top jobs in government, serving as finance minister from 2019 to 2020 and interior minister in 2018.

One of five sons of Pakistani immigrant parents, he is a former managing director at Deutsche Bank and previously worked as an aide to former New York mayor Rudy Giuliani.

Labour leader Keir Starmer said Hancock was right to resign, but tweeted that Johnson “should have sacked him”.

Johnson’s former aide Dominic Cummings had recently turned his guns on Hancock, releasing internal documents related to his early handling of the pandemic.

Even before Saturday’s announcement, Johnson was already under pressure to replace him.

Britain was due to fully ease restrictions on June 21, but the emergence of the Delta variant, first found in India, has led to an extension of social distancing rules. — AFP

These were the details of the news UK Health Secretary Matt Hancock resigns after Covid breach for this day. We hope that we have succeeded by giving you the full details and information. To follow all our news, you can subscribe to the alerts system or to one of our different systems to provide you with all that is new.