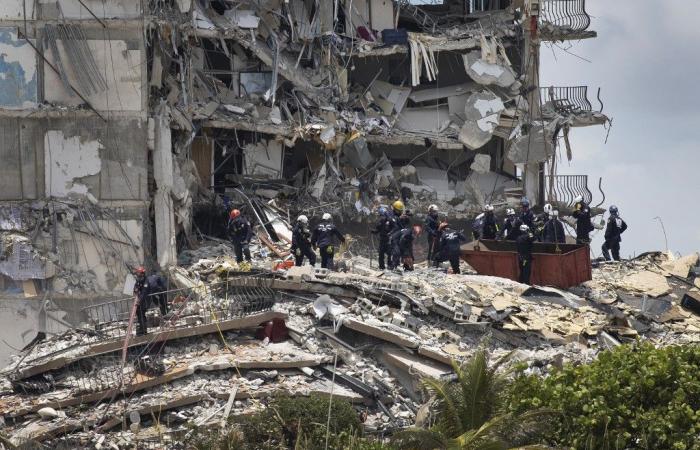 SURFSIDE, June 27 — Florida officials continued to hold out hope yesterday for survivors of a high-rise apartment building that partially collapsed three years after an engineer had warned of “major structural damage.”

But fire was complicating the increasingly desperate effort to find 159 people still unaccounted for more than two days after part of the building pancaked into a mountain of debris.

“We’re facing incredible difficulties with this fire,” Miami-Dade County mayor Daniella Levine Cava told reporters early yesterday. She said workers dug a trench through the debris to control the “very deep” blaze, but that smoke had spread throughout the site.

But, she added: “We continue to have hope. We’re continuing to search. We’re looking for people alive in the rubble, that is our priority and our teams have not stopped.”

Four people have been confirmed dead after the 12-story oceanfront building in Surfside, near Miami Beach, collapsed as residents slept inside early Thursday.

Cava said yesterday that the casualty numbers were unchanged from the day before.

Still, the passage of time with no further survivors being found raised fears of a much higher death toll as rescuers sift through the debris with heavy machinery and sniffer dogs, and as increasingly frustrated families continued their agonizing wait.

“We have a friend who got out of the building with her husband,” Gina Berlin, 54, who lives in the neighborhood, told AFP. “She is still traumatized... And I am still in shock. I came to pray for the missing ones.”

At a makeshift memorial on a nearby street, well-wishers piled flowers and lit candles, while family members posted dozens of pictures of missing persons on a chain-link fence.

Authorities and experts have stressed that the causes for Champlain Tower South’s collapse are still unknown.

But the report of an engineering consultancy that studied the building in 2018, released late Friday by officials, underlined early concerns.

It said its inspectors found “major structural damage” to the concrete slab below a ground-level pool deck and “abundant” cracking and crumbling in the parking garage.

“Failure to replace the waterproofing in the near future will cause the extent of the concrete deterioration to expand exponentially,” warned the report, from the Morabito Consultants firm.

Most of the damage was “probably caused by years of exposure to the corrosive salt air along the South Florida coast,” it said.

The report did not indicate that the 40-year-old building risked collapse, but said it needed repairs to maintain “structural integrity.”

A lawyer for the building’s owners told the New York Times that work was “just about to get started” on the multi-million dollar repairs.

Florida Governor Ron DeSantis told reporters yesterday that local officials were “considering potentially evacuating” a nearby building that was built by the same developers, around the same time, as the collapsed structure. But he said there were no indications of immediate danger there.

A study led by Florida International University found signs of land subsidence — a phenomenon affecting much of the Atlantic coast — at the site in the mid-1990s.

Mayor Cava said the county would immediately undertake a one-month safety audit of all buildings 40 years or older.

Meanwhile, authorities held out hope that survivors were underneath the rubble.

“All of our training tells us that for at least the first 72 hours, there are high likelihood of people that could be alive in there,” Danny Cardeso, with Miami-Dade Fire Rescue, told CBS News.

Israel announced it was sending a team of engineers and rescue specialists to help.

“We will make every effort to help save human life, and to offer our support to the Jewish community and to our American friends,” said Defense Minister Benny Gantz.

Officials in Canada said Friday that at least four of its citizens may be “affected,” without elaborating. At least 18 Latin American nationals are among the missing — including Uruguayans, Argentines and Paraguayans.

Faced with the painstakingly slow search, some families voiced frustration.

“Not enough is being done,” said Mike Salberg, who came from New York after the accident. Five family members, including his parents, remain unaccounted for.

“I want answers,” he told AFP.

Others were preparing for the worst.

“My friend’s mom is there (under the rubble),” a man who gave his name only as Mark said.

“We want to be hopeful but also we have to be realistic. The next step is being there for the families and know why this happened.” — AFP

These were the details of the news Still ‘hope’ as rescuers race fire to find Florida collapse survivors for this day. We hope that we have succeeded by giving you the full details and information. To follow all our news, you can subscribe to the alerts system or to one of our different systems to provide you with all that is new.