Anger at Miami disaster response, and demands for answers 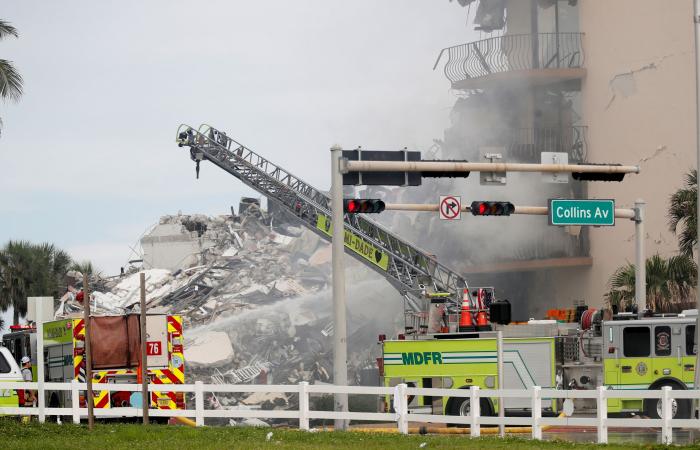 Hello and welcome to the details of Anger at Miami disaster response, and demands for answers and now with the details

MIAMI, June26 — From his balcony overlooking the rubble of what used to be Champlain Towers, Maurice Wachsmann lambasts the pace of the recovery operation after the building’s collapse.

“It is absolutely not a rescue operation,” he says.

His best friend Chaim Rosenberg — who had an apartment on the second floor — is missing along with his son and daughter-in-law.

The feeling of anger is shared by other friends and family of people feared trapped in the rubble, who wonder whether neglect may have played a role in the disaster in Surfside, near Miami Beach.

The death toll is so far four dead and 159 missing.

Local authorities say they have deployed hundreds of firefighters and rescuers to find survivors among the remains of the twelve-story building overlooking the sea, which collapsed during Thursday’s early hours.

Yesterday, nearly 40 hours after the tragedy, teams searched the piles of concrete and scrap metal, while firefighters pierced the walls hoping to free survivors.

Nearby, pictures of those missing have been hung on a chain-link fence, which has been turned into a makeshift shrine with flowers and candles.

Among the candles and flowers placed on the beach a short walk from the building, one mourner had left a small statue of the Virgin Mary.

But the more the hours pass, the more impatience and anger grow.

“This site over here, where we are being told that there were hundreds of workers evacuating people and trying to rescue people — this is absolutely not a rescue operation, this is nothing,” says Wachsmann.

Wachsmann left New York a few hours after the disaster — along with Rosenberg’s nephew, Mike Salberg — and rented an apartment in the building adjacent to Champlain Towers, with a direct view of the operation.

“My uncle’s apartment’s right there, where that purple pillar is by the screen door,” says Salberg.

“There hasn’t been one rescue worker trying to actually take off debris, little by little, even by hand, without machines to actually get people potentially removed,” he says.

“Now there are a ton of air pockets where potentially there could be survivors hopefully.”

‘There is still hope’

The authorities say they understand the frustration.

“To the families who are waiting for news of their loved ones, we are giving them twice-daily briefings, with details of exactly how the search is being conducted,” said Miami-Dade County Mayor Daniella Levine Cava yesterday evening.

“There is still hope,” she said, noting that victims in similar tragedies had been found alive a week later.

Others are demanding to know whether structural problems are to blame for what happened. According to a 2020 study, the building suffered a “very subtle” sag in the 1990s.

Janette Aguero, 46, was staying with her husband and two children on the 11th floor of the building, on the street side, on the night of the tragedy.

Awakened by what she says felt like an earthquake, she and her family ran down the stairs to escape.

“You hear the rumors about the building, the structure, there’s anger if it was something preventable,” she tells AFP.

Aguero, who arrived last Friday, said she heard cracks and “a couple of weird sounds” in the days before the disaster. Improvement work on the building had been under way.

“Was it something from the building trying to give you a sign that this was going to happen?” she wonders.

“I was fortunate enough to have survived but my family could be going through what people are going through right now, and to watch them is heartbreaking,” she says.

“I want answers for them. They deserve it, and someone needs to be held responsible if it’s neglect. Someone has to pay.” — AFP

These were the details of the news Anger at Miami disaster response, and demands for answers for this day. We hope that we have succeeded by giving you the full details and information. To follow all our news, you can subscribe to the alerts system or to one of our different systems to provide you with all that is new.