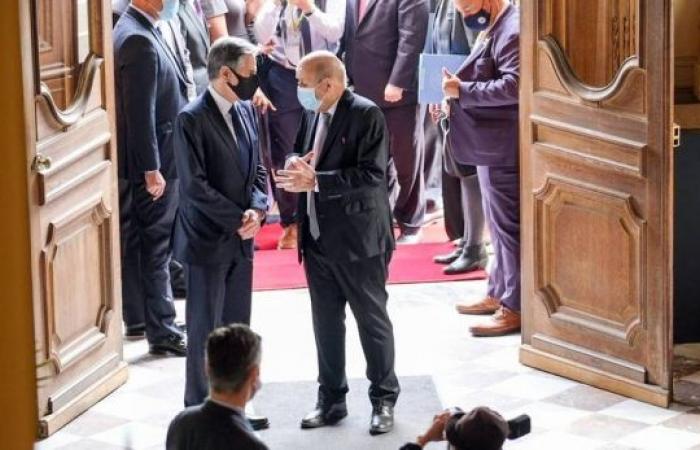 We show you our most important and recent visitors news details Blinken: Iran's acquisition of nuclear weapons poses threat to the region in the following article

Hind Al Soulia - Riyadh - PARIS — US Secretary of State Antony Blinken has reaffirmed that Iran's acquisition of nuclear weapons poses threat to the region, warning against the difficulty of Washington return to the Iranian nuclear accord if negotiations are prolonged.

In a press conference held in Paris Friday, he said, “No date for ending the negotiations could be fixed”, indicating that there are still serious existing differences with Iran.

Blinken on Friday warned Iran that the United States could eventually give up on rejoining a nuclear deal if talks in Vienna drag on.

“There will come a point, yes, where it will be very hard to return back to the standards set by the JCPOA,” Blinken told reporters in Paris, referring to the 2015 nuclear accord from which former US president Donald Trump withdrew in 2018.

He reiterated assertion of his country's support for the government in Afghanistan, and the continuation of diplomatic presence over there, drawing attention to the rising attacks in the country.

Pointing to the depth and strength of bilateral relations binding Washington and Paris, he called for further consolidating them to face mutual challenges and to defend the democratic values.

“We expect the Iranian authorities to take the final decisions — no doubt difficult ones — which will allow the negotiations to be concluded” in Vienna, Le Drian said Friday.

Parties to the nuclear deal — Britain, China, Germany, France, Russia and Iran — have been meeting in Vienna for months with indirect US participation in order to restore the deal, which promised Tehran sanctions relief in exchange for curtailing its nuclear program.

On Sunday, Iran’s envoy to the talks, Deputy Foreign Minister Abbas Araghchi, said they were close to a deal but that gaps remain.

“We are now closer to an agreement than ever. But it is not an easy task to close the distance currently between us and an agreement,” Araghchi told Iran’s national television.

“At this point, it is clear which fields, which actions are possible and which are not. Therefore, it is time for all sides, especially our counterparts, to be able to make their final decision.” — Agencies

These were the details of the news Blinken: Iran's acquisition of nuclear weapons poses threat to the region for this day. We hope that we have succeeded by giving you the full details and information. To follow all our news, you can subscribe to the alerts system or to one of our different systems to provide you with all that is new.