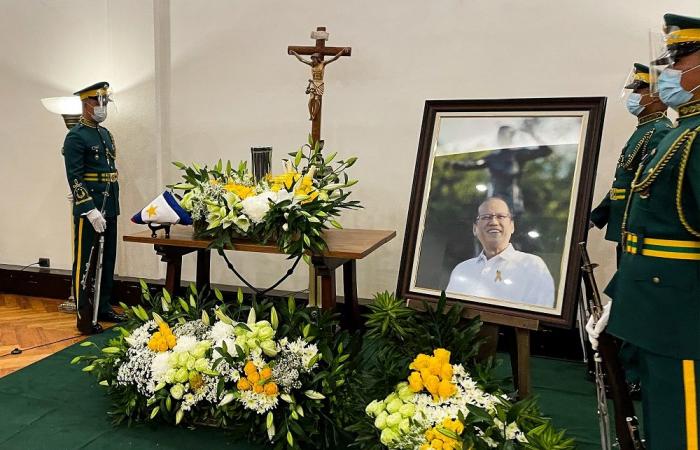 Hundreds of mourners in black and white, some also wearing yellow ― the colour associated with the Aquino family and a 1986 revolution that toppled a dictator ― ribbons and face masks, attended a funeral mass and burial ceremony.

Aquino, president from 2010 to 2016, died at age 61 in a Manila hospital on Thursday of kidney failure as a result of diabetes.

“To the man we were so blessed to have as our brother, we will forever be proud of you, thank you, long for you and love you,” Maria Elena Aquino-Cruz, an older sister of Aquino, said at the funeral mass. “To all of you, the bosses of Noy, thank you.”

Aquino's remains were cremated on Thursday. Thousands queued for the public viewing in a church in his alma mater yesterday.

Filipinos lined up along roads to pay respect during the one-hour convoy of dozens of vehicles from his alma mater, Ateneo de Manila University, to the cemetery south of the capital.

The military gave a 21-gun salute and a helicopter rained down yellow flowers. At the Aquino residence at the heart of the capital, supporters left chrysanthemums, yellow bell and sunflower for the late leader.

Among those paying respects to Aquino was vice president and political ally Leni Robredo, and close friends. Most supporters were blocked at the entrance of the cemetery to prevent mass gathering and the spread of Covid-19.

“I pay respect to a leader that is humble and gave true love for the country, people and God,” Thelma Chua, 64, clad in yellow shirt at the funeral, told Reuters. “I pray for another family with the attitude like Noy and his parents that will fight for truth, justice, loyalty, love for God and country.”

Known popularly as Noynoy, Aquino rode a wave of public support to the presidency after the 2009 death of his mother, the revered “People Power” leader Corazon Aquino, who was president from 1986 to 1992.

His namesake father, a staunch critic of dictator Ferdinand Marcos, was assassinated when he returned from political exile in 1983, planting the seeds for the 1986 People Power revolution that booted the strongman from office.

As president, the younger Aquino led the Philippines in shedding its perennial “sick man of Asia” image through better governance and robust economic growth. He challenged Beijing's sweeping claims of the South China Sea before the arbitration court in The Hague in 2013.

President Rodrigo Duterte did not attend the funeral. He declared a 10-day period of mourning, with national flags in government buildings flying at half-mast.

Aquino, who led a private life after stepping down, is survived by four sisters. ― Reuters

These were the details of the news Filipinos bid farewell to former president Benigno Aquino for this day. We hope that we have succeeded by giving you the full details and information. To follow all our news, you can subscribe to the alerts system or to one of our different systems to provide you with all that is new.