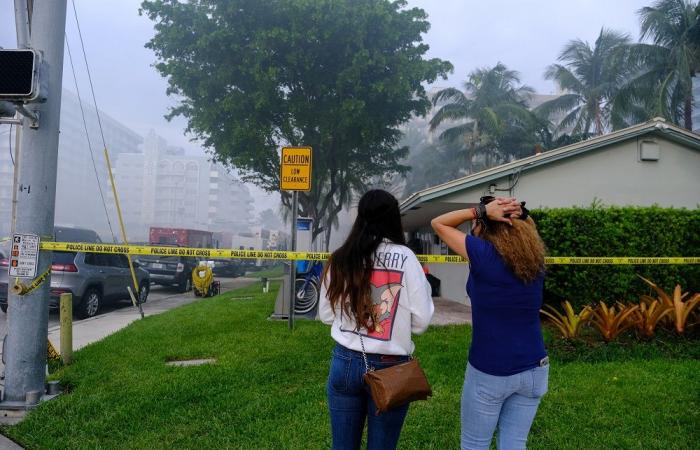 SURFSIDE (Florida), June 26 ― Families and friends of the 159 people missing after the collapse of a residential building in a Miami suburb clung to hope yesterday as rescue workers sifted through a mountain of debris for signs of life, having found four dead so far.

Three more bodies were pulled from the rubble overnight after one person was reported dead on Thursday, and there were 159 people presumed missing as of Friday afternoon.

“We have one goal in mind now and that is to bring people out alive and that's all we're doing,” Surfside Mayor Charles Burkett told reporters on Friday. “We're not stopping.”

Rescue workers tread carefully through the unstable debris looking for survivors, removing rubble by hand while battling intermittent rainstorms and fires that periodically broke out within the site.

Atop the pile, others wielded hammers and picks looking for signs of life. Heavy equipment scraped away the top layer.

Below ground, rescuers who entered through the parking garage risked their own lives searching for survivors, occasionally being hit by falling debris, officials said.

Miami-Dade Fire Rescue chief Andy Alvarez told families of the missing to “have hope,” and recalled that his team once pulled a girl out of earthquake debris in Haiti eight days into the rescue effort.

“You gotta have hope. We're doing everything we can to bring your family member out alive,” Alvarez said on CNN, pausing as he was overcome with emotion.

The disaster occurred early on Thursday morning, when many people would have been asleep, as a large section of the 40-year-old high-rise crumbled to the ground.

Video captured by a security camera showed an entire side of the building suddenly folding in two sections, one after the other, at about 1.30am (0530 GMT), throwing up clouds of dust.

The Champlain Towers South condominium is in Surfside, a barrier island town across Biscayne Bay from Miami.

Dozens of people were gathered at a reunification site at the Surfside Community Center - a hectic scene with volunteers running around and people hugging to console one another.

Outside the centre, Toby Fried held back tears when she said she last spoke to her brother Chaim “Harry” Rosenberg about 90 minutes before the collapse. Rosenberg had lived in Champlain Towers for about a year and a half. He and his daughter Malki Weiss and her husband Beni Weiss, who were visiting him from Brooklyn, were all missing.

“They came to stay with him for a week on vacation,” Fried said.

Rescuers had heard sounds in the rubble overnight, which could have been falling debris or people tapping, Miami-Dade Fire Rescue chief of operations Ray Jadallah said.

“We are listening for sounds, human sounds,” Jadallah said.

Miami-Dade Mayor Daniella Levine Cava said the figures of four dead and 159 unaccounted for remained unchanged throughout most of Friday.

A fire official said earlier that 35 people were evacuated from the section of the building left standing, and response teams using trained dogs and drones pulled two individuals from the rubble. One of them was dead.

Survivor Janette Aguero, her husband and her two teenage children had been staying in her mother-in-law's apartment for vacation this week. Around 1.20am on Thursday, she was startled by what felt like an earthquake, she said. Her family ran down the stairwell to escape.

“A million things raced through my mind,” Aguero said. “I grabbed the kids and our phones. That was the only thing we could take because everyone was telling us we had to get out.”

“The room where my children slept is only 15 feet away from the section that collapsed,” she said.

US President Joe Biden approved an emergency declaration in the state of Florida and ordered federal assistance to supplement state and local response efforts, sending Federal Emergency Management Agency officials to the scene.

“Our hearts go out to them,” Biden said.

The cause of the collapse remained a mystery, although local officials said the 12-story tower was undergoing roof construction and other repairs.

“Either the building is settling into the soil or maybe there is some compromise with the structure, a compromise within the building. We cannot really say,” he said in a telephone interview. “I was very surprised, because I didn't expect that.”

There was insufficient data to show whether the movement continued since then, Wdowinski said.

Officials said the complex, built in 1981, was going through a recertification process requiring repairs, with another building under construction on an adjacent site.

The Champlain Towers South had more than 130 units, about 80 of which were occupied. ― Reuters

These were the details of the news Search intensifies at Florida building collapse as families cling to hope for survivors for this day. We hope that we have succeeded by giving you the full details and information. To follow all our news, you can subscribe to the alerts system or to one of our different systems to provide you with all that is new.