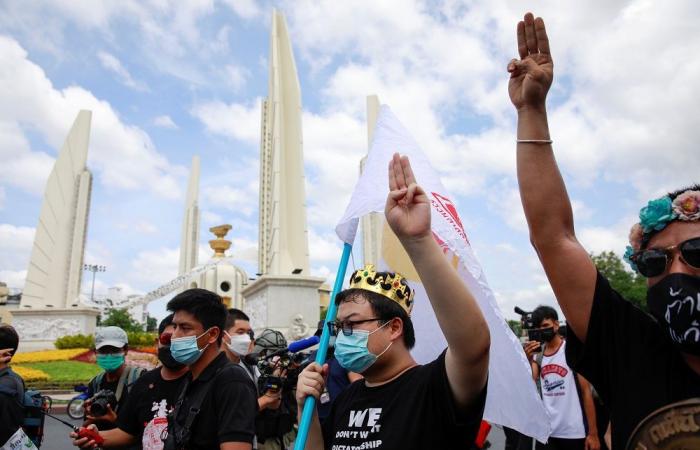 Hello and welcome to the details of New troubles for Thai leader amid Covid-19 virus surge, fresh protests and now with the details

BANGKOK, June 24 ― A year after the start of student-led protests against Thailand's military-backed government, Prime Minister Prayuth Chan-ocha is facing growing anger amid a mounting wave of coronavirus infections and a dismal economy.

This time, some of those calling for Prayuth to step down are his one-time allies.

Today, three separate groups of protesters marched to demand the resignation of Prayuth, who first came to power in 2014 when, as army chief, he led a military coup against an elected government.

Several political parties in parliament ― including two in Prayuth's ruling coalition ― are preparing to try to change the military-drafted constitution that helped keep him in office through elections in 2019, by allowing a junta-appointed Senate to vote for the prime minister.

Assuming the continued support of the military and Thailand's powerful king, it is likely that the new push to change the political power structures will come to nothing again.

Still, frustration with Prayuth in particular has grown from last year, when it was mainly students calling for him to go.

“People have to come out now to clean up the dirt in our system,” said political activist Nittitorn Lamlua, who will lead a group of protesters in Bangkok on Thursday.

Nittitorn, 56, is a veteran of the “Yellow Shirt” movement of mostly royalist conservatives who protested against a succession of elected populist governments, the last of which was ousted when Prayuth seized power.

Nittitorn shares few views with the youthful student protesters of last year. In fact, he led a counterprotest to defend the king and the monarchy ― seen as sacred institution by many conservative Thais ― against the students' call for curbing the king's powers.

But Nittitorn ticks off a list of the prime minister's faults: mismanagement of the coronavirus and the economy, inadequately defending the monarchy from calls for reform, plus failure to restore true democracy with the 2019 elections.

“My goals are all for nation, religion, monarchy and people and democracy, and it is this government that has pushed me to come out again, through their failures and their mismanagement,” Nittitorn said.

Government spokesman Anucha Burapachaisri said the government was willing to listen to criticism but the prime minister still had an obligation to run the country during the COVID-19 crisis and would only act in the best interests of the public.

“The government is trying not to be an opponent to any particular groups,” he said.

‘Prayuth is the problem’

On the opposite side of Thailand's political divide to Nittitorn is Jatuporn Prompan, a former leader of the 2009-2010 populist “Red Shirt” movement supporting exiled former leader Thaksin Shinawatra, who Nittitorn protested against and who was ousted in a 2006 military coup.

“We see that Prayuth is the problem for the country, and he has to be removed,” Jatuporn said.

Thailand's ongoing third wave of coronavirus ― which has seen the most cases and deaths, reaching a record 51 deaths yesterday ― has only fuelled anger.

“The public pressure is palpable, mounting and people want answers,” said Thitinan Pongsudhirak, political scientist at Chulalongkorn University and director of the Institute of Security and International Studies.

Still, he said, with the military and palace still behind Prayuth, it's difficult to see how he could be removed.

The 2017 military-written constitution stipulates that the Senate, appointed by Prayuth's former junta, votes for prime minister along with the elected House of Representatives, making it nearly impossible to remove him.

This week, parliament is debating amendments to that constitution.

Along with opposition parties, even two members of Prayuth's ruling coalition ― the Bhumjaithai and Democrat parties ― favour changes that would remove the Senate's right to vote for prime minister. The next general election is due by 2023.

But changes to the constitution also require the Senate's approval ― and there is little chance the appointed body would vote to decrease its own power.

Support for Prayuth from his pro-army Palang Pracharat Party and the powerful military appeared to be unshaken despite the increasing pressure from elsewhere.

Another sign of trouble for Prayuth might be if King Maha Vajiralongkorn were to express disapproval of his leadership, though Thitinan says rumours of that have proven untrue.

“There are no signs for me at this time that the palace backing has been withdrawn,” Thitinan said.

“We are kind of stuck with Prayuth indefinitely, until the next election.” ― Reuters

These were the details of the news New troubles for Thai leader amid Covid-19 virus surge, fresh protests for this day. We hope that we have succeeded by giving you the full details and information. To follow all our news, you can subscribe to the alerts system or to one of our different systems to provide you with all that is new.

PREV ‘This is how I’m going to die’: Police testify on US Capitol riot
NEXT Deadly heat wave slams Canada, US