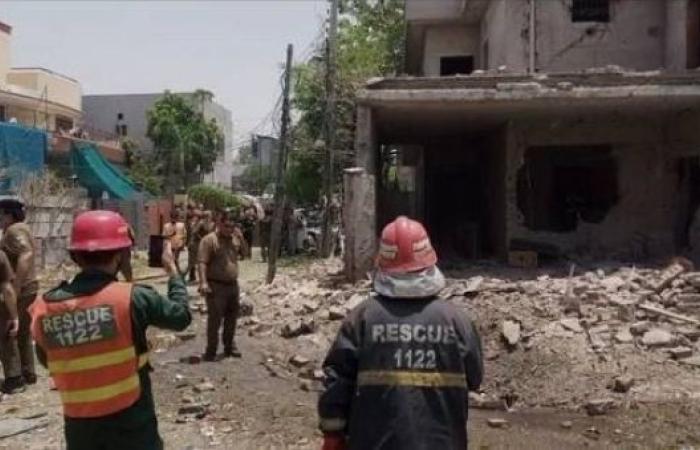 We show you our most important and recent visitors news details Three killed, 21 hurt in Lahore's Johar Town blast in the following article

Hind Al Soulia - Riyadh - LAHORE — At least three people were killed and 21 injured, including women and children, on Wednesday after a bomb blast at Lahore's Johar Town triggered speculation to the reason behind the blast, Dawn reported.

The blast left a crater on the explosion site at Lahore’s Johar town and the injured have been shifted to Jinnah Hospital as law enforcement officials try to determine the reason behind the blast, the report further said.

The explosion took place around 11 a.m. in a residential area near the town's Allah Hu boulevard, police said. Television footage showed visible damage to nearby houses whose walls had collapsed and windowpanes shattered.

A statement from Lahore police chief Ghulam Mehmood Dogar said that three people had been killed. It added that 13 injured were being treated at Jinnah Hospital while eight others had been discharged.

Jinnah Hospital Medical Superintendent Dr. Yahya Sultan said seven of those admitted to the hospital were in critical condition with "ball bearing and blast injuries". He added that the injured included two women, one of whom was pregnant and had to be put on a ventilator.

Punjab Inspector General of Police (IGP) Inam Ghani, who visited the area a couple of hours after the incident, told reporters that the explosion took place near the residence of proscribed Jamatud Dawa (JuD) chief Hafiz Saeed.

He said police were guarding Saeed's house at the time of the attack, resulting in serious injuries to some officials. A Dawn correspondent who was present at the scene after the blast said the windows and walls of Saeed's house had been damaged from the impact.

Ghani said officials were currently assessing the damage, adding that nothing could compensate for the lives lost. He assured citizens that the perpetrators would be held responsible.

"The Counter-Terrorism Department (CTD) has taken over [the investigation]. The CTD will determine whether it was a suicide blast or if a device was used," he said.

He urged citizens and the media to not "speculate", adding that officials received hundreds of threat alerts every year. "Even right now we have about 65 threat alerts," he said, adding that there was an "external element" involved in most terrorist attacks.

"These attacks are usually carried out by countries that want to harm Pakistan and its progress," he said. We have peace in our country because of our intelligence agencies, he added.

A statement shared by Punjab police quoted the IGP as saying that "the vehicle (used in the attack) could not move much due to the police check post near the blast and the terrorists failed to do much damage due to the presence of the police team."

In a tweet later in the day, Ghani reiterated that the CTD would investigate the "terrorist act" outside the "clamor of the media".

"This way we will be able to stop exposing the progress to the terrorist and HIAs [hostile intelligence agencies]. I hope our media will understand and cooperate with us," he said.

Earlier, while speaking to reporters at the site of the incident, Lahore Deputy Commissioner Mudassir Riaz Malik said 12 people, including women and children, had been injured. He said that the injured also included a police official.

At the time, Malik had said it was not immediately clear what had caused the blast, adding that it had left behind a crater. "We will only be able to determine the cause after carrying out an investigation," he said, adding that the area was being cordoned off.

A resident of the area said his house had been badly damaged. "It was constructed six years ago. We have no other place to go," a visibly distressed man told Samaa TV. Another eyewitness claimed that a device planted on a motorcycle had detonated.

The sound of the blast was so loud that it was heard in faraway areas. However, the nature of the blast has not been ascertained yet. An eyewitness told Geo News that an unidentified individual parked a motorcycle near the house which later exploded.

A few minutes after the explosion, a spokesperson for Rescue 1122 said it was not immediately clear what caused the blast. "So far we have not been able to determine whether a gas pipeline burst or whether it was a cylinder. But we have shifted four people [to the hospital] and more injured are expected."

Following the bomb attack in Johar Town, the Lahore police chief issued directives to heighten security across the city. Snap-checking in Johar Town and nearby areas have been increased. Special instructions have been given to check suspicious individuals and unclaimed items.

Meanwhile, Punjab Chief Minister Usman Buzdar took notice of the blast, and directed the IG to investigate the incident and submit a report. "Those responsible for the blast should be brought under the law," he said.

He told authorities to provide the best medical facilities to those who were injured, while also directing officials to impose an emergency at Jinnah Hospital.

He said the Punjab government stood with the victims and their families. The incident is being investigated under the supervision of the additional IG CTD, he said, adding that Punjab Health Minister Yasmin Rashid was in the field to ensure that those injured were being provided the best medical treatment.

Federal Interior Minister Sheikh Rashid also took notice and directed the Punjab chief secretary and the IG to submit a report. The minister prayed for the speedy recovery of the injured.

"The nature of the blast is being determined," he said, adding that the federal government would assist the provincial government in investigating the incident.

Leader of the Opposition in the National Assembly Shahbaz Sharif said that the blast in Lahore was "ominous".

"Deeply concerned that the law and order situation is not being given the kind of attention it deserves. Important to probe it for possible leads and establishing context. My condolences to bereaved families and prayers for the injured," he said. — Agencies

These were the details of the news Three killed, 21 hurt in Lahore's Johar Town blast for this day. We hope that we have succeeded by giving you the full details and information. To follow all our news, you can subscribe to the alerts system or to one of our different systems to provide you with all that is new.