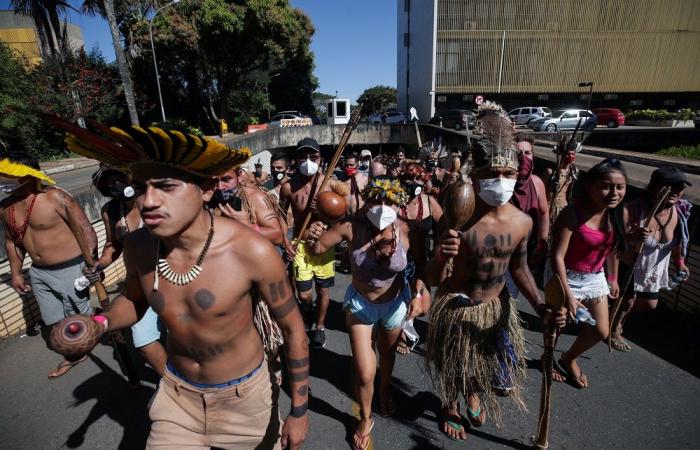 Activists said two indigenous people were hospitalised with severe injuries, and a dozen more sustained light injuries in the clashes, while the congressional press office said at least three police officers were wounded with arrows.

The press office said around 500 protesters tried to “invade” one of the entrances to Congress, and that police responded with tear gas, stun grenades and pepper spray after coming under attack with arrows.

However, organisers said the protest was peaceful and that police “brutally” repressed it.

Videos posted on social media by the protesters showed indigenous people in traditional feather headdresses and body paint screaming, running and dragging what appeared to be an injured man through a haze of tear gas.

“Today is a troubling day for the right to protest, and for democracy,” lawmaker Joenia Wapichana, Brazil’s first indigenous congresswoman, told a news conference.

The events led lawmakers in the lower house to suspend a committee session on “PL 490,” a bill that would change the regulations establishing protected indigenous lands.

Indigenous rights groups warn the bill would pave the way for things such as mining, hydroelectric dams and road construction on previously protected reserves.

Far-right President Jair Bolsonaro has been pushing to open protected lands to such development since taking office in 2019.

Critics say that would accelerate the destruction of the Amazon rainforest, a vital resource in the race to curb climate change. — Reuters

These were the details of the news Indigenous protesters clash with police in Brazil for this day. We hope that we have succeeded by giving you the full details and information. To follow all our news, you can subscribe to the alerts system or to one of our different systems to provide you with all that is new.