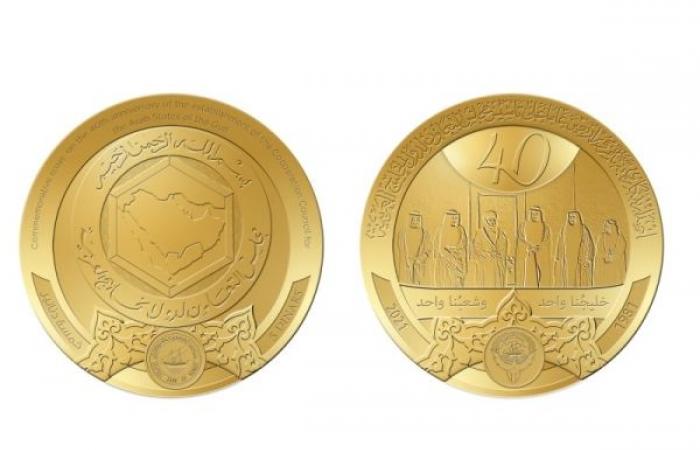 Hind Al Soulia - Riyadh - KUWAIT — The Central Bank of Kuwait has issued the second batch of commemorative coins marking the 60th anniversary of the national currency and the 40th anniversary of establishing the Gulf Cooperation Council (GCC) for the Arab States of the Gulf.

The Central Bank of Kuwait (CBK), in a statement issued on Tuesday, announced the release of the second batch of commemorative coins marking the 60th anniversary of the issuance and circulation of the Kuwait national currency, as well as the 40th anniversary of the establishment of the GCC.

A second batch was minted due to the high demand on the two commemorative coins upon their previous release.

The press statement highlighted the special occasion of the 60th anniversary of the issuance and circulation of the national currency and its stability and strength.

It also marks the CBK's concerted efforts over decades and deliberate exchange that kept the Kuwaiti Dinar pegged to an undisclosed special weighted basket of currencies of countries that share significant economic and trade relations with the State of Kuwait, and, ultimately, supports the country's monetary stability; itself an integral pillar of financial stability.

Likewise, the CBK issued a commemorative coin to mark the 40th anniversary of the establishment of the Gulf Cooperation Council, and to recognize the GCC's vital role and efforts towards stability and development in the region despite the geopolitical headwinds throughout the last decades, and to honor the founding leaders and their roles in the Council's success story.

The CBK expressed its pride in such coins that mark deeply felt occasions and important historical events, pointing out that the two commemorative coins are made of gold-plated fine silver in line with the world standard specifications. Those wishing to acquire the coins may visit the CBK's Banking Hall by booking an appointment through the "Meta" App. — KUNA

These were the details of the news Kuwait central bank issues commemorative coins marking currency, GCC anniversaries for this day. We hope that we have succeeded by giving you the full details and information. To follow all our news, you can subscribe to the alerts system or to one of our different systems to provide you with all that is new.