WFP feeds more than one million in Tigray, but needs support to reach more 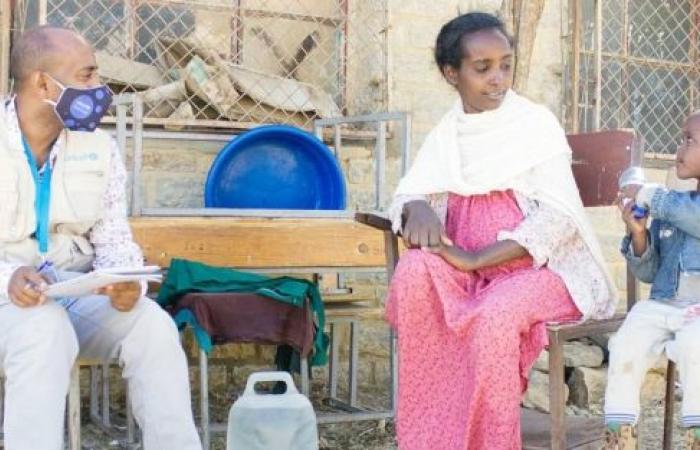 We show you our most important and recent visitors news details WFP feeds more than one million in Tigray, but needs support to reach more in the following article

WFP has been supporting people in the Northwestern and Southern zones affected by the conflict between Ethiopian Government forces and the Tigray People’s Liberation Front (TPLF), which began in November.

Aster Beyene, a 43-year-old mother of seven, this week became the one millionth person to collect wheat, split peas and vegetable oil from the agency. She lost her home and her crops two months ago in the fighting.

“Up until now I have relied on what little food I can get from my neighbors. At least now we have some relief from the hunger we have been suffering,” said Beyene, who is from Adi Millen, a remote rural village some 50 kilometers from the town of Shire in Northwestern zone.

On Monday, WFP provided food aid to the 4,500 villagers there, closing out the first round of distributions, which will be carried out every six weeks in Tigray. Operations will be scaled-up to reach 2.1 million people.

WFP is seeking $203 million to continue to ramp up response across the region, where some 5.2 million people, or more than 90 percent of the population, needs emergency food assistance.

The agency continues to lead emergency nutrition response to children and pregnant or nursing women, though access remains the main challenge, particularly in rural areas.

WFP has also delivered some 40,000 metric tons of food for the government and partners to Tigray, and has transported more than 20,000 metric tons for the National Disaster Risk Management Commission within the region.

No end to child violations: UNICEF

Nearly seven months into the war, the magnitude of child rights violations taking place across Tigray shows no sign of abating, the head of the UN Children’s Fund, UNICEF, said in a statement on Tuesday.

“Over 6,000 unaccompanied or separated children have so far been identified and registered for protection and assistance. We fear there are many more children who need support in areas that we are unable to reach due to insecurity or access restrictions imposed by parties to the conflict,” said Henrietta Fore, the UNICEF executive director.

She added that family tracing and reunification have been constrained by limits in telecommunications, social workers, and access across lines of control.

Women and girls in Tigray are still being subjected to what Fore described as “appalling acts of sexual violence”.

Although UNICEF has helped some 540 survivors since November, “the overall lack of security, and fear of reprisals, leave untold numbers unable to receive the care and services they urgently need,” she said. At the same time, adolescent boys report they fear recruitment and being used in the hostilities.

The fighting has displaced at least 1.6 million people, including more than 720,000 children, according to Fore, who said the conditions at sites hosting them, as well as refugee camps, are overcrowded, unsanitary and unsafe.

Meanwhile, much of Tigray remains inaccessible to humanitarian workers.

“Since the beginning of April, at least 31 missions by mobile health, nutrition and water teams supported by UNICEF and partners have been blocked, either due to insecurity or because they were harassed and denied passage,” Fore said.

UNICEF is adamant that children are paying a terrible price for the conflict. The agency has called on the warring sides to respect their obligation to enable access to civilians in need, especially children.

“Above all, we call on all parties to do everything in their power to protect children from violence, exploitation and abuse, and to prevent separation from their parents or primary caregivers,” Fore added. — UN News

These were the details of the news WFP feeds more than one million in Tigray, but needs support to reach more for this day. We hope that we have succeeded by giving you the full details and information. To follow all our news, you can subscribe to the alerts system or to one of our different systems to provide you with all that is new.