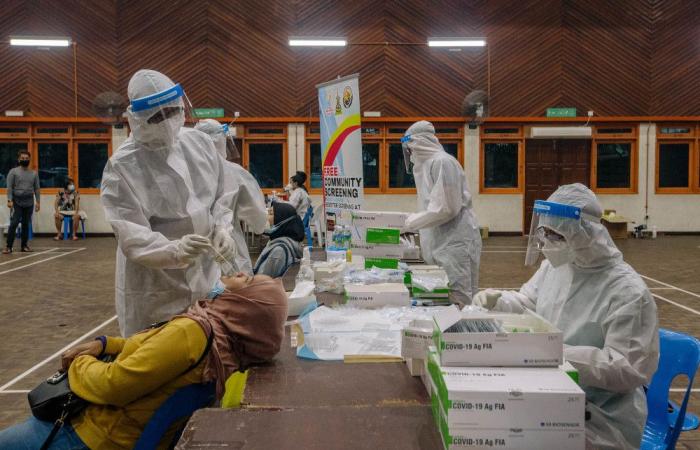 KUALA LUMPUR, May 31 — A sharp rise in coronavirus cases from new variants in parts of South-east Asia that had been less affected by the pandemic has prompted new restrictions, factory closures and attempts to rapidly scale up vaccination programmes across the region.

The number of daily new Covid-19 cases in Malaysia has soared past India’s on a per capita basis, while total cases in Thailand, Vietnam, Cambodia, Laos and East Timor have all more than doubled in the past month.

Thailand, which was the second country to record infections after China, had won plaudits for containing its first wave of cases, but its death toll has risen ten-fold over two months — though at just over 1,000 is still low by global standards.

Adding to concerns, Vietnamese officials revealed the discovery over the weekend of a “very dangerous” combination of Indian and UK Covid-19 variants, which spreads quickly by air.

In the absence of vaccines, containment is the priority.

Vietnam crushed earlier waves — and the country of 98 million has still suffered fewer than 50 deaths — but new distancing measures started in its business hub Ho Chi Minh City on Monday.

In the north of the country, factories supplying global tech firms such as Apple and Samsung are operating below capacity because of outbreaks, industry sources said.

As Malaysia ordered a “total lockdown” from Tuesday to stem the spread, officials said some factories could keep operating at reduced capacity.

Malaysia has tried to step up its vaccination campaign, but fewer than 6 per cent of people have received at least one dose of a vaccine — barely half the proportion in India.

Some South-east Asian countries had placed less emphasis on vaccine procurement than Western countries or simply could not afford them and now have limited access.

“With a smaller segment of the population that is protected from vaccination, the vast majority of the population remains susceptible,” said Teo Yik Ying, dean of the Saw Swee Hock School of Public Health at the National University of Singapore.

“The healthcare systems in several South-east Asian countries are either at risk of being or already have been completely overwhelmed.”

Only the wealthy city state of Singapore has comparable vaccination rates to Western countries with over 36 per cent getting at least one injection, but the appearance of cases from new variants there has also prompted new closures this month.

Prime Minister Lee Hsien Loong was due to outline a strategy for opening up the country, whose economy depends on its place as a regional business and transport hub.

“The solution: Testing, contact tracing, and vaccinating, all faster, and more,” Lee said.

Health officials are also watching closely for any resurgence in Indonesia and the Philippines, the region’s two most populous countries, which were both hit hard by the pandemic last year.

The Philippines recorded its highest number of daily infections in four weeks on Friday. Indonesia’s seven-day average of new cases reached its highest in more than two months on Sunday.

A surge of cases has also been reported near Myanmar’s Indian border — raising concerns about a health system that has collapsed since a February 1 coup. — Reuters

These were the details of the news South-east Asia’s Covid-19 surge prompts shutdowns and alarm for this day. We hope that we have succeeded by giving you the full details and information. To follow all our news, you can subscribe to the alerts system or to one of our different systems to provide you with all that is new.