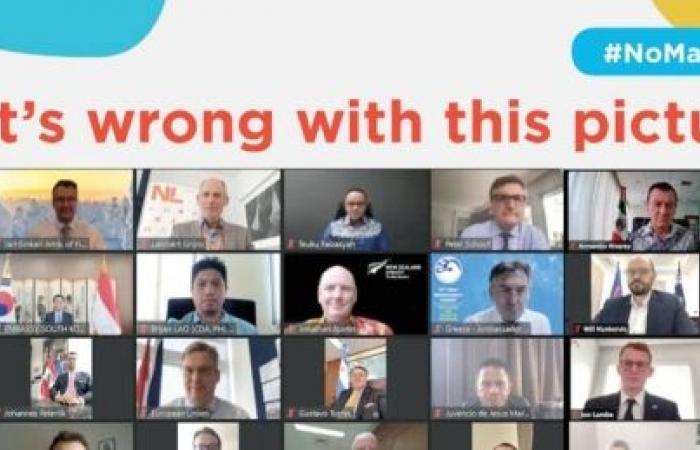 We show you our most important and recent visitors news details No ‘manels’, more gender equality in Indonesia: Julliand in the following article

Hind Al Soulia - Riyadh - JAKARTA — Panel discussions exclusively made up of men, or ‘manels’ need to stop, said Valerie Julliand, the United Nations Resident Coordinator in Indonesia. Julliand has taken steps to promote gender parity by pledging that the UN will only participate in panels which include women’s voices.

“You’ve seen it before. Probably many times. Panel discussions featuring men only. Maybe they’re talking about economics or policy or community engagement or health. The panelists may be experts in their fields, but the panels are missing something. Women.

These all-male panels — called ‘manels’ — should stop. The UN team in Indonesia has taken a firm pledge to not participate as a speaker/panel member in any public meetings, conferences, or webinars where there are no women on the panel.

We’ve also disseminated our ‘no-manel’ pledge widely across social media and have invited our partners and the diplomatic community in country to join us in this pledge. All of this has taken place with the support of the UN Women Representative in Indonesia, Jamshed Kazi.

Being a woman resident coordinator, I have often been the only woman on a panel, therefore “saving” the organizers from having a ‘manel’ but not really living up to the spirit of equality. On such occasions, I used my remarks to signal the absence of women other than myself.

There are many reasons to end the practice of ‘manels’; I’ll mention just a few. ‘Manels’ do not represent the diversity of our world and deprive us of a more holistic, innovative, and insightful perspective on any given discussion or topic.

‘Manels’ are like tunnel vision: they limit the understanding of a topic for they only bring men’s perspectives to the discussion. They may lead to incomplete — if not incorrect — conclusions. There is no topic on earth that doesn’t concern women, whether it’s education or health or conflict or sanitation or infrastructure.

‘Manels’ are also manifestations of sexism and exclusion, which reinforce the gendered stereotype of men commanding authority or superior expertise; they imply that women are not capable of contributing to the discussion. No matter the topic, there are women qualified to talk on any issue. Men have dominated public discussions and their perspectives have been valued above women’s for so long.

A common excuse is that women panelists are a little harder to find; well, panel organizers just have to look a little harder. ‘Manels’ are an aberration when the issue being discussed directly concerns women, such as sexual and reproductive rights. Youth activists had a motto, “nothing about us without us”; the same applies to women’s issues.

If we want gender equality in presidencies and parliaments and other positions of power, then we certainly ought to be able to have women on every panel. There’s no reason to leave women out of any discussion, and there’s every reason to include them, for they bring another perspective and raise questions and issues that men might never have considered.

For these and other reasons, we at the UN in Indonesia have taken a ‘no-manel’ pledge, and, with our encouragement and the strong support of the Ambassador of Canada, we’ve gotten over 40 ambassadors — including not just the typical donor nations, but also ambassadors representing a diverse range of countries from every continent — to join in.

In addition, senior officials from the government of Indonesia have joined this initiative. There continues to be considerable interest and we fully expect the number of ambassadors, ministers and even CEOs from the private sector to grow in the weeks ahead.

UN Indonesia is putting together a user-friendly and practical guide to assist our country team members as well as our external partners to avoid situations of either co-organizing or speaking at an event featuring a ‘manel’. It is clear that in certain disciplines, there are far fewer women than men and, even with the best of intentions, it is particularly challenging to identify suitable women experts

Still, there is no silver bullet, no quick fix. The phenomenon of ‘manels’ will not disappear overnight, but the UN will have unquestionably raised the bar, increased the cost of neglecting women’s voices, generated greater public awareness and created a multiplier effect towards normalizing gender-balanced public policy discourse.

The ’no-manel’ pledge is sometimes construed as a strike at men. None of this is to disparage men’s points of view, only to point out the obvious, and to reverse it: a panel without women is a disservice to the world of equality, freedom, and peace we seek to build, and need.” — UN News

These were the details of the news No ‘manels’, more gender equality in Indonesia: Julliand for this day. We hope that we have succeeded by giving you the full details and information. To follow all our news, you can subscribe to the alerts system or to one of our different systems to provide you with all that is new.