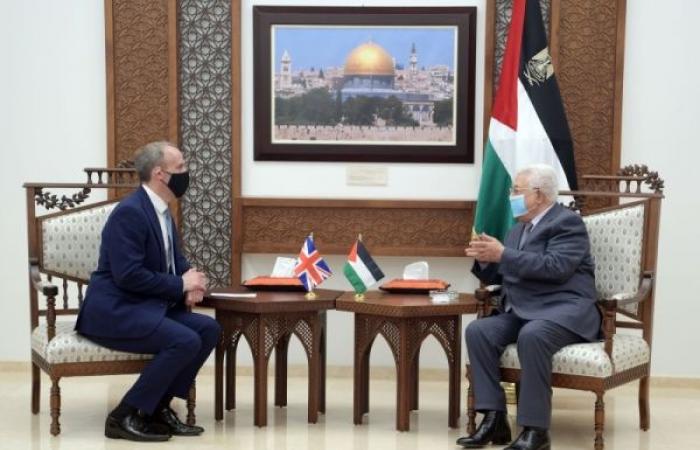 Hind Al Soulia - Riyadh - RAMALLAH — Palestinian President Mahmoud Abbas has called for an end to the Israeli occupation of the Palestinian territories with East Jerusalem as its capital in line with international resolutions.

Abbas stressed the importance of immediate commencement of a political process during his meeting here with British Foreign Secretary Dominic Raab on Wednesday, the Palestinian news agency WAFA reported.

The Palestinian president briefed the visiting British foreign secretary on the political situation in the Palestinian territories, underlining the importance of immediately halting the Israeli settler extremists’ attacks, backed by Israeli forces, in the occupied West Bank, including Jerusalem.

He further stressed the need to ensure the solidification of the cease-fire in the entire Palestinian territories and to support the reconstruction efforts of the devastated besieged Gaza Strip.

Abbas praised the British support in institution-building and economic development, affirming the need for the UK to play a role in pushing the peace efforts forward in accordance with international legitimacy.

For his part, the British foreign secretary affirmed his country’s position in support of the two-state solution, its readiness to support the peace efforts between the Palestinians and Israelis, and its continued support for the Palestinian people. — Agencies

These were the details of the news Abbas calls for end to Israeli occupation
in meeting with British foreign secretary for this day. We hope that we have succeeded by giving you the full details and information. To follow all our news, you can subscribe to the alerts system or to one of our different systems to provide you with all that is new.

NEXT Mercenaries ‘impede’ peace, must leave Libya to allow elections