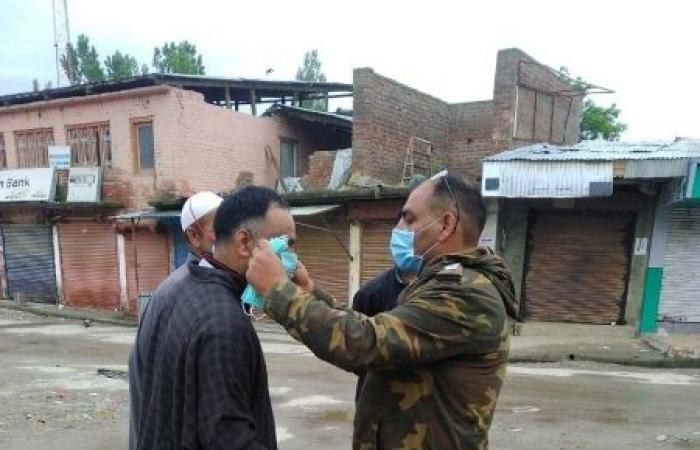 Hind Al Soulia - Riyadh - NEW DELHI — Indian security forces in the newly created union territory of Jammu and Kashmir are at the forefront in the battle against COVID-19 besides fighting militancy. The union territory has recorded an average of 3,558 new cases for the last seven days while the total death toll has risen to 3,609 as of May 24, 2021.

The surge in the positive cases has overwhelmed government-run hospitals across the union territory. India’s Defence Research and Development Organization (DRDO) has come to the rescue of the J&K Government by setting up 500-bedded temporary COVID-19 hospitals, one each in Jammu and in Srinagar. The work on both the hospitals is going on a war-footing basis. The Indian Army has set up COVID-19 hospitals in Srinagar and other districts of J&K and is lending all possible help to fight the pandemic.

As the cases in COVID-19 designated hospitals in Jammu and Kashmir witnessed a surge, the DRDO announced that it would set up two 500-bedded temporary coronavirus hospitals in both Jammu and Srinagar provinces.

After getting the nod of Union Home Secretary Ajay Bhalla, the DRDO Hospitals are coming up at Bhagwati Nagar in Jammu and at Khonmoh in Srinagar. As many as 313 posts have already been advertised and the Medical Superintendents stand appointed.

A spokesman of the J&K government said that to mitigate the shortages in medical facilities, it was requested that the temporary DRDO Covid-hospitals be constructed in time.

The DRDO hospitals will be equipped with isolation beds having oxygen support and over 100 fully equipped ICU beds. Several separate structures have been raised at the proposed site in Jammu and the work on providing internal electricity is going on. The 24x7 construction work is in its final stage and is likely to be completed within a few days.

Early this month, the Indian Army set up a 250-bed COVID-19 hospital inside the Army camp at Rangreth located on the outskirts of Srinagar. The hospital, set up with the help of the J&K Health Department, has facilities like ICU (with 20 ventilators) and High Dependency Unit (HDU), X-ray, and a laboratory with 7 doctors and 35 paramedical staff.

The process of admission is simple for patients who are referred from the Health Services. This hospital has helped in easing the pressure on many hospitals in the area. The Indian Army has reached out to the people of Kashmir conveying the message that the army is with them in the fight against COVID-19 and is ready to extend every possible assistance to citizens in distress.

In Uri, the Indian Army has similarly set up a 20-bed COVID-19 hospital for the benefit of civilians living in areas close to the Line of Control (LoC). The Army hospital in Uri is aimed at aiding the civilian health infrastructure which is overloaded due to the rise in COVID-19 cases. The hospital has been equipped with 20 beds all having oxygen facility including 5 ICU beds along with 2 ventilators. Doctors and paramedics from the army are taking the best possible care 24x7 of all the patients admitted to the hospital.

Another 100-bed COVID-19 center with high-end laboratory and X-Ray equipment has come up at the Army Public School Domana in Jammu. The facility has 14 ICU beds and 32 HDU units with a separate zone for accommodating 80 female patients.

On one hand, the Indian Army has been setting up makeshift facilities to help the residents of J&K and on the other, Jammu and Kashmir Police have been leading from the front to keep people safe. J&K Police have been at the forefront to impose the COVID-19 lockdown in the Union Territory. Recently a picture of a policeman pleading with a woman with folded hands to stay indoors showed a humane face of the J&K Police. The picture went viral on social media.

The J&K policemen, posted across the union territory, have been ensuring that restrictions remain in force and people stay indoors. At many places, the officers of J&K Police were seen distributing masks among the people and making them aware of health risks posed by the deadly coronavirus.

Security Forces in J&K are fighting a two-front war — one against the deadly second wave of the COVID-19 pandemic and the other against militancy.

As on March 22 this year, just before the second wave of the pandemic wreaked havoc in Jammu and Kashmir, at least 19 terrorists were eliminated and four security forces personnel lost their lives with no civilian casualty from January to March 2021, according to a press statement by the Inspector General of Police (Kashmir Range). Last year, security forces neutralized over 225 militants, including 47 top commanders of various radical outfits.

The year 2020 remained hot on the militancy front and therefore posed a challenge for the security forces despite the outbreak of the COVID-19 pandemic. It is understood that the Indian government’s decision to abrogate J&K’s special status and its bifurcation into two union territories, which is an internal matter of the country, couldn’t be digested well by the promoters of militancy in Jammu & Kashmir. Besides fighting the COVID-19 pandemic in J&K, the security personnel have been fighting the militants and their extremist propaganda.

Amidst the COVID-19 lockdown last year, after the restoration of internet services, the anti-propaganda continued on social media through sharing short audio messages and small video clips in order to attract innocent people to new militant groups, such as the Resistance Front (TRF), People’s Anti-Fascist Front (PAFF), Kashmir Tigers, Al-Badr, etc. Anti-propaganda machinery from across the LoC was active despite rising cases of COVID-19 in India and an attempt was made to project that this all had emanated from within India.

According to official data released last year (Sept. 16, 2020) by the Union Minister of State for Home, there were 111 attempts of infiltration were successful out of a total of 176 attempts made from across the border into J&K from August 2019 to July 2020.

As the summer in J&K has set in, the infiltration routes are likely to open and it can pose a big security challenge in 2021 as security forces personnel have been mobilized to help maintain the COVID-19-induced lockdown and to provide medical aid and information to people living in remote corners of the union territory. — Agencies

These were the details of the news Indian security forces extending helping hand to
coronavirus-hit residents in Jammu and Kashmir for this day. We hope that we have succeeded by giving you the full details and information. To follow all our news, you can subscribe to the alerts system or to one of our different systems to provide you with all that is new.