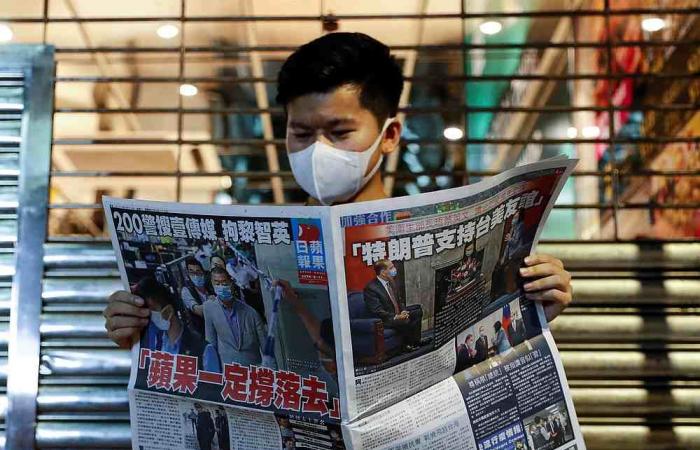 HONG KONG, May 24 — A shadow of fear hangs over Hong Kong’s outspoken and staunchly pro-democracy Apple Daily newspaper, with its billionaire owner Jimmy Lai now jailed and many reporters asking themselves: “Are we next?”

Each day, tomorrow’s date is hung up on the walls of the bustling newsroom, a constant reminder of the need to get the next edition out.

But there are growing signs a time may come when the 26-year-old newspaper has no tomorrow in a city that once marketed itself as a regional bastion of the free press.

“I am facing the greatest crisis since I took up the post over three years ago,” Apple Daily’s chief editor Ryan Law told AFP, just days before authorities used a new national security law to freeze Lai’s assets, including his media empire shares.

On a table in Law’s office sat five recent resignation letters from staff, a vivid illustration of the worries coursing through the newsroom.

But Law, an Apple Daily veteran of some two decades, remained defiant — and devoted to journalism despite the threat.

“Some colleagues asked if Apple will eventually close shop when the CEO or I am arrested,” he said.

“I said: Apple is still here even after Mr Lai’s arrest.”

As China’s crackdown gathered pace in the wake of 2019’s huge and often violent democracy protests, mainland authorities made no secret of their desire to see Apple Daily — and its Next Digital parent group — shuttered.

The raucous tabloid, founded by Lai in 1995, has unapologetically backed Hong Kong’s long and fruitless democracy campaign and can be withering in its criticism of both Beijing and Hong Kong’s leaders.

Lai has long been branded a “traitor” and a “black hand” by Chinese state media, and declared guilty by senior communist party leaders.

Hong Kong’s police chief has recently taken to calling for a “fake news” law, making clear Apple Daily is in his sights.

Prosecutions have come thick and fast for Lai over the last year.

He is currently serving a 14-month sentence for attending two protests in 2019, and faces two more ongoing prosecutions linked to other rallies.

But the most serious charge is “colluding with foreign forces” — a new security crime — for allegedly campaigning for international sanctions.

Lai faces up to life in jail if convicted and it was the security law charge that enabled authorities to seize his assets.

In an interview with AFP last year, Lai was frank that his own chequebook kept Apple Daily going.

Although it remains the city’s most popular media group, like most printed press its circulation has cratered, from around 400,000 at its peak in the 1990s to just 80,000 now.

Any company that relies on the Chinese market has long avoided advertising with the paper.

Since Lai’s assets were frozen, Apple Daily has said it may have only 9-10 months of money in the bank.

Zoe, a reporter who has been at Apple Daily for more than five years, described a constant weight pressing down on her.

“The morale is rather bad,” she told AFP, asking to use a pseudonym to speak freely.

“It feels like something is approaching us... I worry that some day soon I may not be able to work in the press.”

But the city has been sliding down press freedom rankings since its 1997 return to China.

The once raucous local media scene has been steadily tamed to be less critical of Beijing.

“I have worked in a number of newsrooms and Apple is the freest I have encountered so far,” she said.

She considered quitting, but rejected the idea.

“I still want to work here because such a free space is really precious for a reporter,” she said.

“I can’t simply leave it behind when it’s struggling.”

Lai’s arrest last year under the security law was a watershed moment for Apple Daily’s reporters.

The same day, more than 200 police officers raided the newsroom to search for evidence.

The first thing Law did was to tell his reporters to broadcast the raid live on Facebook.

“I was thinking, first and foremost, we must report this news because only we can do it,” he recalled.

In the footage, he could be seen arguing with officers, asking to inspect the search warrant and running between newsdesks to invoke journalistic privilege over evidence — a right enshrined in Hong Kong law.

At a recent townhall meeting, staff asked Law what they should do if the police came back to arrest him.

He had a simple reply: “Broadcast it live.” — AFP

These were the details of the news Future sours for Hong Kong’s brazen Apple Daily tabloid for this day. We hope that we have succeeded by giving you the full details and information. To follow all our news, you can subscribe to the alerts system or to one of our different systems to provide you with all that is new.