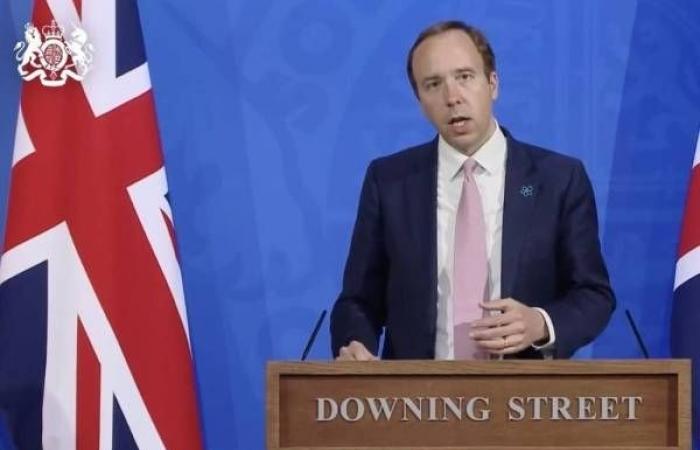 His remarks came after a study by Public Health England (PHE) showed promising results for the two main vaccines being used to fight coronavirus in Britain.

"I'm increasingly confident we're on track for the roadmap because this data shows the vaccine after two doses works just as effectively, and we all know that the vaccine is our way out of this," Hancock told Sky News.

According to the PHE study, which took place between April 5 and May 16, the Pfizer vaccine was 88 percent effective against symptomatic disease from the India-related variant two weeks after the second dose, compared with 93 percent effectiveness against the Kent variant.

Meanwhile, the AstraZeneca jab was 60 percent effective, compared with 66 percent against the Kent variant over the same period.

However, they were only 33 percent effective three weeks after the first dose, the PHE report said.

The PHE said it expects to see even higher levels of effectiveness against hospital admissions and deaths.

Hancock described the outcome as "groundbreaking", adding that "getting the second jab is vital".

From May 17, as part of the British government's lockdown easing plan, restaurants in England were permitted to open indoors, while indoor entertainment resumed, including cinemas, museums and children's play areas.

People were also allowed to travel abroad to a number of green-list countries without having to quarantine upon return as the ban on foreign travel has also been lifted.

The British government's roadmap is expected to see all legal limits on social contact to be removed on June 21.

In a paper published on Friday, the British government's Scientific Advisory Group for Emergencies (SAGE) said coronavirus may continue to evolve for years to come and that "eradication is extremely unlikely".

The experts warn that eventually it is likely "current vaccines will fail to protect against transmission, infection, or even against disease caused by newer variants".

Nearly 37.7 million people, or more than 70 percent of adults in Britain, have been given the first jab of the coronavirus vaccine, according to the latest official figures.

To bring life back to normal, countries such as Britain, China, Russia, the United States as well as the European Union have been racing against time to roll out coronavirus vaccines. — Agencies

These were the details of the news UK "on track" for roadmap exiting coronavirus lockdown for this day. We hope that we have succeeded by giving you the full details and information. To follow all our news, you can subscribe to the alerts system or to one of our different systems to provide you with all that is new.