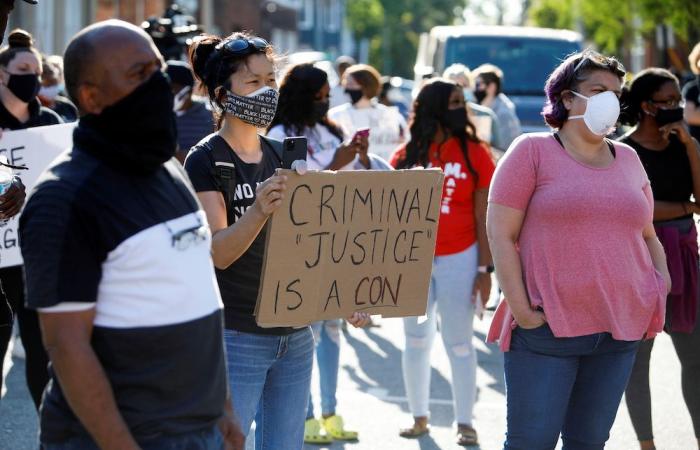 District Attorney Andrew Womble said yesterday deputies were justified in shooting Andrew Brown, 42, outside his Elizabeth City home last month because the officers felt their lives were endangered when he drove his car toward them. Brown was wanted on suspicion of selling illegal drugs.

The killing captured national attention, fueling a debate over the way police use force against Black Americans following the conviction of former Minneapolis police officer Derek Chauvin for murdering George Floyd in a highly publicized trial.

County Sheriff Tommy Wooten yesterday said the three deputies who shot Andrew Brown would remain in their jobs, but would be disciplined and retrained, and their unit would be reconfigured.

Hundreds of protesters marched peacefully through the streets of Brown’s hometown last night demanding an outside investigation, and some told WAVY and other local broadcast stations they planned to not spend any money in the county today in an economic boycott.

“This was a terrible and tragic outcome, and we could do better,” Wooten said in a video posted on Facebook. Wooten also said he would ask a judge once again to release all of the law enforcement videos now that the district attorney had decided against criminal charges.

In his remarks the sheriff also addressed the Brown family. “This should not have happened this way at all,” he said. “While the deputies did not break the law, we all wish things could have gone differently, much differently.”

Attorneys for the estate of Andrew Brown said they planned to file a federal lawsuit, CNN reported today, and that the family was asking the Department of Justice to intervene. The lawyers did not respond to a request for comment today.

The FBI said last month it was investigating whether the deputies violated Brown’s civil rights.

North Carolina Governor Roy Cooper said in a statement that the federal investigation should continue and criticized how local officials handled the killing.

“Public confidence would have been better served with a special prosecutor and by quickly making public the incidence footage,” he said. “Our state should pass specific laws to increase transparency, confidence and accountability in the justice system.” — Reuters

These were the details of the news Protests planned as North Carolina officers who killed Andrew Brown keep jobs for this day. We hope that we have succeeded by giving you the full details and information. To follow all our news, you can subscribe to the alerts system or to one of our different systems to provide you with all that is new.