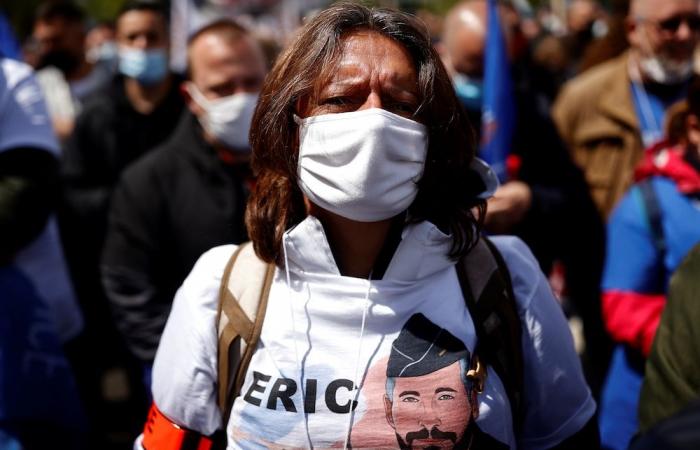 PARIS, May 19 — Thousands of French police officers rallied in Paris today demanding better protection and harsher punishment for attacks against them, two weeks after the killing of an officer sent shockwaves through the force.

Police unions had called for the gathering after officer Eric Masson was shot dead earlier this month while investigating activity at a known drug-dealing site in the southern city of Avignon.

The death of the 36-year-old father-of-two caused deep shock in Avignon—a city better known for its summer theatre festival than for violent crime.

It also reignited a debate over President Emmanuel Macron’s record on fighting crime ahead of next year’s presidential elections.

The demonstration outside the National Assembly was to remind deputies “that they must step up and legislate to make sure what has just happened doesn’t happen again”, said Fabien Vanhemelryck, the head of the Alliance police union.

It came on the same day that the government submitted an amendment to the penal code that could deprive anyone sentenced to life imprisonment for crimes committed against a police officer of the possibility of parole before 30 years served, up from 22 currently.

The draft, to be put to a vote in the National Assembly this week, is to “allow very firm punishment of the perpetrators of such acts”, the government said.

But police unions deplore that the government has not acceded to their demand to also introduce mandatory minimum jail terms for violence against officers.

Patrice Ribeiro, who heads the Synergie Officers union, said “everyday low-level violence” had to be met with the full force of existing laws because “that is how a feeling of impunity starts and grows”.

Anyone could join the protest, police unions said, with the organisers telling AFP that 35,000 people had done so, but no politician would be allowed to address the crowd, they said.

Interior Minister Gerald Darmanin made a discreet appearance, having told France Inter radio earlier that “I will tell them that we love them”.

Most other political parties across the spectrum also sent representatives, one month ahead of regional elections seen as an early test for the public mood on security questions.

Only the far-left LFI party said it would stay away, calling the police appeals “a list of corporatist demands”.

Statements from police officers relating their experiences in the field were broadcast from a stage.

“I’m a policeman and I support all my colleagues who risk their lives daily,” a policeman who had travelled from the Normandy region and identified himself only as Mickael told AFP.

Two suspects in Masson’s killing were arrested just over a week ago around 20 kilometres (12 miles) from Avignon, source close to the case said.

The pair is suspected of being the shooter and an accomplice in the killing.

Masson’s death came after the April 23 killing of Stephanie Monferme, a police employee who was stabbed to death in the town of Rambouillet outside Paris in the latest jihadist attack in France.

More than 250 people have been killed in jihadist terror attacks on French soil since 2015, with security forces often targeted. — AFP

These were the details of the news French police demand greater protection after officer’s killing for this day. We hope that we have succeeded by giving you the full details and information. To follow all our news, you can subscribe to the alerts system or to one of our different systems to provide you with all that is new.